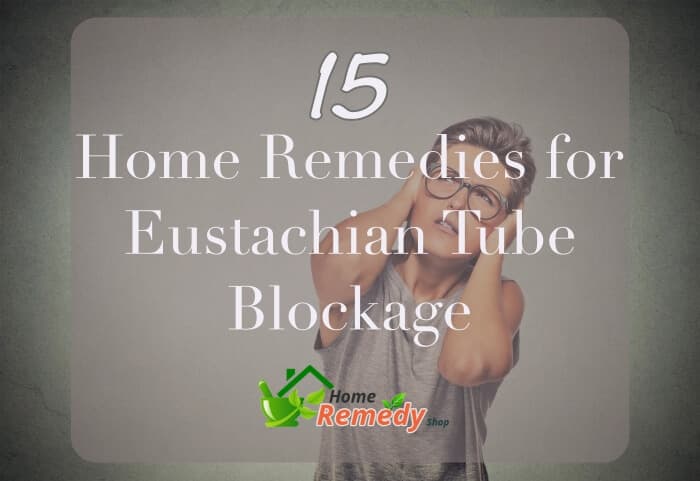 Ringing, pain, and pressure in your ears are enough to interrupt your on-the-go lifestyle, and getting rid of those horrible sensations is something that just can’t wait. These symptoms are quite typical for someone who suffers from a Eustachian tube blockage.

Fortunately, you don’t have to stay out of the race for long once you know how to clear Eustachian tube blockage naturally by making use of items you probably already have in your home. With our 15 natural remedies, you can get back to normal quickly.

The following home remedies are all methods people have used throughout the years to help with eustachian tube blockage. Many people swear by some of the items on this list as being the best possible cure, but we will leave it up to you to decide which one is the best for your needs.

Do keep in mind that these are not the only options you have. Of course, you should always see a doctor before trying any of the remedies on this list just to rule out a more serious health condition, which can sometimes be the case with this symptom. You want to ensure there is nothing else going on except a little blockage.

One of the simplest ways to open a Eustachian tube blockage is to yawn. The simple act of yawning helps to decrease air pressure in the middle ear and helps to activate the muscles which open up them up.

Because Eustachian tube blockage is often related to nasal congestion, gargling with salt water is another way to naturally open up the tubes as well as relieve any nasal congestion which might be complicating the problem.

Another way to naturally clear Eustachian tube blockage is a trick that most people use when flying; chewing gum. Chewing gum, as well as swallowing, works in a similar manner as yawning by relieving excess pressure and activating the muscles that open up the tubes.

Common among swimmers, the Valsalva maneuver is another natural remedy to help clear the eustachian tube blockage. Because swimmers often encounter problems associated with water in the ears, sinus cavities, and eustachian tube complications, most have developed a means of helping relieve clogging and pressure.

Though this one will probably seem a little silly, the Otovent maneuver is another way of equalizing air pressure and opening up eustachian tube blockage naturally. This maneuver is almost identical to the Valsalva maneuver but utilizes a balloon as a helpful tool.

Eustachian tube blockage is often caused by congestion and inflammation. You can often clear the pressure and congestion or relieve the pain using a warm compress to reduce inflammation and help naturally open the closed tubes.

Another natural remedy for relieving eustachian tube blockage comes from inhaling steam. Steam helps to thin any sinus mucus which might be adding to the congestion and blockage of your sinus cavity and relieve the pressure on the tubes.

Because congestion can build up in and around the middle ear and exacerbate eustachian tube blockage olive oil can help to bring some relief to the pressure and pain in your ears.

Similar to warm olive oil, warm water can also help bring some relief to the pain and pressure of eustachian tube blockage naturally. Flushing your ear with warm water acts to help reduce swelling around the middle ear where the tube connects to it.

Another natural remedy to help clear Eustachian tube blockage is a simple, saline nasal spray. The nasal spray can help to open up any inflammation in the rear of the nasal cavity which is pushing the tube closed.

Those who are well familiar with herbal remedies will recognize stinging nettle as a natural remedy for clearing eustachian tube blockage. Stinging nettle is one of the most effective naturally occurring antihistamines available. It will help to shrink swollen tissues surrounding the eustachian tube and keep it open.

Another antihistamine that can help relieve the pressure in the surrounding tissues and clear the eustachian tube blockage comes from onions or apples. The antioxidant quercetin, found in these two foods, helps to reduce inflammation in sinuses and airways, which can help relieve congestion and pressure around the middle ear area.

Effective against respiratory inflammation bromelain, found in pineapples, is another antihistamine that is able to help eliminate Eustachian tube blockage naturally. Bromelain is very popular in the relief of allergies and is quite effective at helping reduce swelling in the middle ear area as well.

Though most people are not aware of it, vitamin C is also a natural antihistamine that can help to reduce swelling of the tissues in and around the Eustachian tube blockage. This is one of the best remedies for not only clearing up this problem but from keeping it from happening in the first place.

How Do You Clear Blocked Eustachian Tubes?

If you are a little off your game because of the pain and pressure of blocked Eustachian tubes, then you are well aware of the urgency with which you need to find a solution to the issue. Knowing how to clear Eustachian tube blockage naturally is a great benefit for not only gaining momentary relief but also for preventing it.

Questions, comments, and success stories are always welcome and encouraged in the section below.