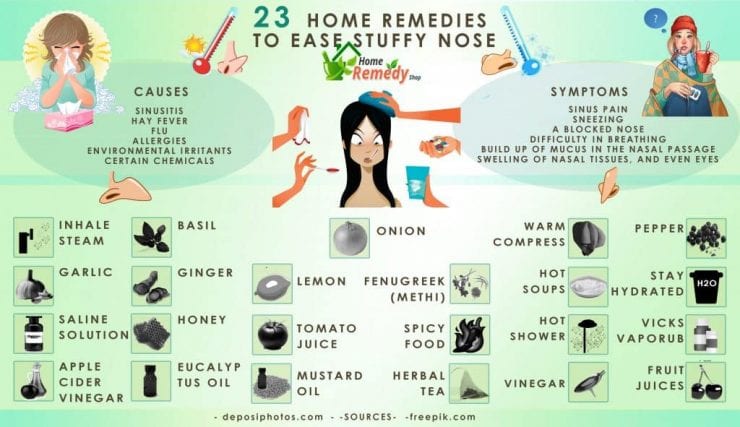 A stuffy nose also called nasal congestion, occurs due to a build-up of mucus, swelling in the nose, sinusitis, or even through certain allergic substances. It is caused due to inflammation in the inner membranes of the nostrils. A stuffy nose can cause serious problems if left unnoticed, such as restlessness, ear infection, as well as sinus problems. The problem of a stuffy nose can easily be treated by natural homemade remedies, which are mostly found in our kitchen and used in our day-to-day lives. Make sure to treat it before it worsens. It can be very troublesome to have it around. These home remedies are proven and tested. Everybody is different. Thus, find out which among will be effective for you.

Basic Information About the Stuffy Nose

Here are some natural remedies made at home that you can easily try in order to treat a stuffy nose.

Inhaling steam is the best cure for this type of condition. Crush 1 tablespoon of carom seeds (ajwain) in boiling water. Now, inhale the steam of this water at least 2-3 times a day. You can also add a few drops of peppermint oil or some Vicks VapoRub in boiling water and inhale its steam.

The saline solution helps a lot to clear a stuffy nose. Mix a teaspoon of table salt in 2 cups of warm water and mix it well. Now, pour this solution into your nostrils with the help of a dropper. It will give you instant relief from nasal congestion. You can also do this with the help of a neti pot.

Chew 3-4 basil leaves before having breakfast and before going to bed at night. You can also make a tea of basil leaves. It will work wonders to cure a stuffy nose.

Consume ginger tea in order to get relief from a stuffy nose. For better results, add honey and lemon to your ginger tea. Else, grate fresh ginger. Have it with a glass of lukewarm water. This is an effective remedy to fix a stuffy nose.

Consume 2 teaspoons of pure honey mixed in a glass of lukewarm water every day, until you get relief from a stuffy nose.

Eucalyptus oil is one of the most effective home remedies to relieve this condition. Pour a few drops of eucalyptus essential oil on a handkerchief or on a small piece of cloth and inhale its fragrance. You can also pour some on your pillow in order to get the benefit even when you are asleep.

Mix 2 tablespoons of lemon juice and ¼ teaspoon of black pepper powder with a little bit of salt. Apply this mixture to get effective relief from a stuffy nose.

Put 2-3 drops of mustard oil in your nostrils to get quick relief from the blocked nose.

Boil some fenugreek seeds in a glass of water, and drink it when it is warm. Drink this solution at least 2-3 times a day for quick results. This is a good home remedy to unclog a stuffy nose.

13. How To Get Rid Of a Stuffy Nose With Spicy Food

Increase your intake of spicy foods while you are suffering from this condition. Include lots of red chilies, onions, ginger, and garlic in your food. It will facilitate the easier flow of mucus from nasal passages, thereby relieving you from a blocked nose.

Herbs, like chamomile, thyme, peppermint, rosemary leaves, or blackberry are great remedies for treating a stuffy nose. You can make a tea of these herbs and drink it on a regular basis till you get relief from a blocked nose.

This is one of the best home remedies for a stuffy nose and head. Placing a warm compress over your nose will give you instant relief from the problem of a stuffy nose, especially if you have chronic sinusitis.

Hot chicken soup is the best remedy for the stuffy nose as it effectively heals the cold symptoms while giving relief from nasal congestion.  You can also drink vegetable soups to get healed up quickly.

Stand under a hot shower till there is an adequate build-up of hot steam. Inhale this steam in order to let the mucus easily flow out from the nasal lining.

Boil some vinegar and inhale its steam. This really helps a stuffy nose. You will get instant relief and notice a difference in no time from the problem of a blocked nose.

Pepper is a great remedy to cure a stuffy nose. Put a teaspoon of black pepper along with a tablespoon of honey in a cup. Fill it with boiling water and let it steep for about 15 minutes. Now, stir it well. Drink this mixture to relieve a stuffy nose.

Drink lots of water while you are suffering from a stuffy nose. It will help to unstuff a stuffy nose and give a lot of relief from nasal congestion.

Rub a small quantity of Vicks VapoRub onto the chest and around your nostrils. It will ease congestion by opening up the nasal passage.

To ease a stuffy nose, drink fruit juices. For effective results, pour a few drops of oregano oil into the juice.

Peel off and cut an onion. Smell it for 4-5 minutes. It will clear your nose, giving you relief from nasal congestion.

Homeopathic Remedies For a Stuffy Nose

Here are some homeopathic remedies for a stuffy nose. But, before using any of them, check your symptoms.

1. Allium cepa 30: This remedy can be taken when there is a lot of mucus discharge from the nose along with watery eyes and a painful cough.

2. Belladonna 30: When there is blood-stained discharge from the nose along with an acute headache, this remedy is helpful.

3. Gelsemium 30: This remedy is very useful when the stuffy nose is accompanied by symptoms like dizziness, fever, headache, and body ache.

4. Nux vomica 30: This remedy should be taken when there is a running nose during the daytime while it gets stuffy at night, especially in dry weather.

5. Arsenic 30: When there is less acidic mucus discharge indoors while heavy outdoors, arsenic 30 is recommended.

Other homeopathic remedies that can be taken for curing a heavily stuffed nose are Natrum Mur 30, Euphrasia 30, Mercurius sol 30, and Pulsatilla 30.

The following tips will help you to prevent a stuffy nose: