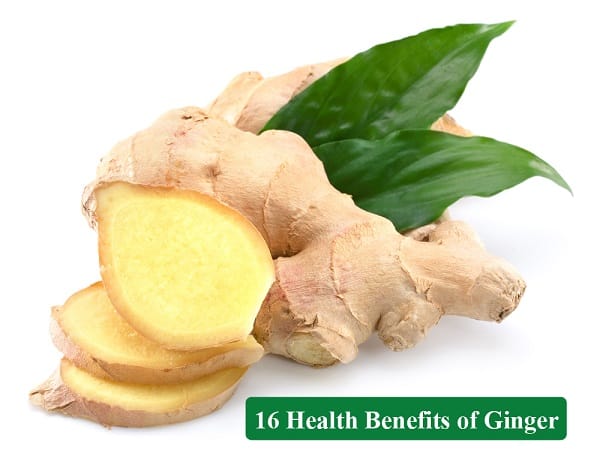 16 Health Benefits of Ginger You Should Know

The classic Indian household favourite spice, ginger, is the powerhouse of various nutrients that makes it effective and largely used for avoiding various health and derma related ailments. The strong and spicy aroma of ginger has obtained its own niche in every kitchen.

Due to its therapeutic effects, ginger has been used since ages and in different forms, like powdered, dried, juice, oil, and fresh. Let’s have a look at 16 health benefits of ginger you should know.

16 Health Benefits of Ginger You Should Know

The antihistamine properties present in ginger treats the respiratory problems well. It is a perfect option for treating sore throat, and cough and cold. A teaspoon of ginger juice when taken with honey helps in curing the sore throat. Moreover, ginger is an all time favourite for getting rid of clogging in the throat and nose. Even during asthma, a brew of ginger juice, fenugreek and honey proves to be effective.

During pregnancy, some women complain of suffering from morning sickness. Ginger proves to be helpful in such conditions.

Had a large meal?? Feeling heavy?? Just chew a fresh piece of ginger! It will improve the absorption of essential nutrients in the body, thus aiding in digestion.

5. Remedy for Loss of Appetite

For those, who suffer with the problem of loss of appetite, ginger is a boon as it increases the production of digestive juices in the body, thereby acting as an appetite booster. Remember to eat fresh ginger just before you have a meal.

Having an upset stomach?? Well, ginger has a cure. Eat fresh ginger to prevent yourself from the troubles of bloating and gas.

If ginger is taken at the onset of the menstrual cycle, it can relieve menstrual pains and cramps to a great amount.

Ginger is equally good in relieving a person from headache, whether caused by migraine or sinus. Apply ginger paste on the forehead and inhale its aroma. Ginger will help in relieving inflammation in the blood vessels, thereby reducing headache.

The analgesic and anti-inflammatory compounds present in the ginger help reduce joint disorders, like arthritis. Bathing with water, mixed with ginger oil, can also cure muscle and joint pain.

Ginger is highly rich in antioxidants and has the capability to provoke the death of cancerous cells and suppressing certain proteins. Ginger is an effective therapy in curing certain cancers, like ovarian and colon.

Ginger is also used for relieving heartburn. For this purpose, it is mostly taken in the form of tea.

Ginger reduces the risk of atherosclerosis by making blood platelets less sticky. Use ginger in cooking and beverages to get benefits of its anti-coagulant properties.

Boil a few pieces of ginger with water and add a piece of cinnamon bark. Bring it to boil, till it entirely changes into golden colour. Drink it to alleviate fatigue after recovering from fever and it is equally good in muscle pain and soreness.

Ginger juice is one of the best pain killers. It can be directly applied to the aching areas. Ginger is effective in headache, toothache, and jaw pain.

A teaspoon of young ginger juice and honey in a half-boiled egg is an effective remedy in curing impotency and premature ejaculation. It also increases the sperm count. Take this potion on an empty stomach, every night, for a month.

Either prepare its tea or intake it raw or cooked, ginger helps in every form. It strengthens your immunity and protects you from cold, flu and other serious diseases.

Delicious Ways to Use Ginger in The Kitchen

Now that you’ve read the 16 health benefits of ginger you should know, we want to help inspire you to use more ginger in your food. Ginger adds sweetness to food that makes it great to use in baked food.

You’ll find that most ingredients only require a small amount of ginger in cooking. However, many supermarkets only sell ginger in large amounts to make a profit, so you can always use the powder form if you’re concerned about food going to waste.

Ginger is perfect to use in sweet and spicy dishes and is commonly used in Indian meals, such as chicken tikka masala. It’s also a great companion for stir-fries since it adds a fresh flavor to the food. There are also many Thai dishes that use a lot of ginger. Mix the spice with coconut milk to create a delicious chicken coconut curry that’s to die for.

Once you’ve purchased ginger, it’s important that you properly store it. Keep ginger in a fridge and it’ll comfortably last for up to two weeks. However, make sure you don’t peel the ginger before storing it as doing so can affect its lifespan.

Store the ginger in a plastic container, and ensure there’s no moisture present as this can make it go bad. Did you know you can also freeze ginger? This is perfect if you purchase more than you need. Peel it and store in your freezer, and it’ll last for up to three months.

Should I Use Fresh or Dried Ginger?

There’s a big difference in taste between fresh and dried ginger. If you’re looking for a strong, spicy flavor, fresh ginger is a great choice. On the other hand, dried ground ginger is commonly used in baked goods such as cookies and biscuits because this formula has less spice.