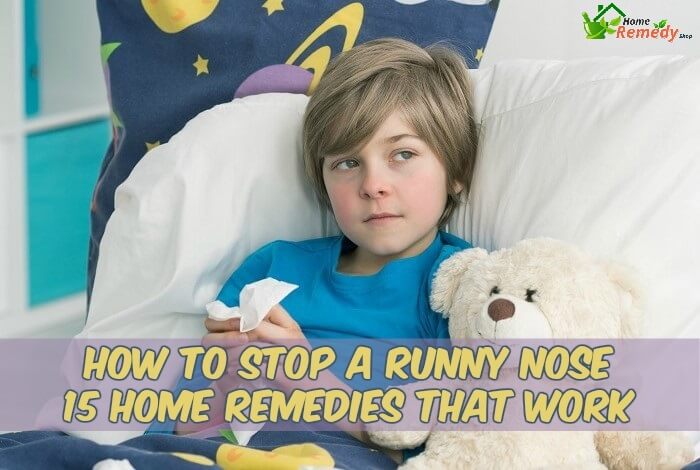 How to Stop a Runny Nose: 15 Remedies that Really Work

We are a participant in the Amazon Services LLC Associates Program, an affiliate advertising program designed to provide a means for us to earn fees by linking to Amazon.com and affiliated sites.

A runny nose isn’t only unsightly and embarrassing, but it is also irritating and distracts you from your daily routine. Our purpose in this article is to examine 15 remedies for how to stop a runny nose that really work. Before we get into those remedies, let’s consider what causes a runny nose.

Essentially, a runny nose is the draining of mucus from the sinuses. The reason that mucus is draining is due to some irritant in the sinuses which has activated an immune response to flush the irritant out. Those irritants are typically related to a virus, allergies, a sinus infection of some sort or a dramatic change in the weather.

Most of the time a runny nose is not a major concern and these remedies are beneficial in how to stop a runny nose, but they are not all inclusive. If a runny nose becomes chronic and lasts for a long time, it’s best to consult your health care provider to search for potentially more serious causes.

How to Stop a Runny Nose: 15 Remedies that Really Work

We’re going to start our list of how to stop a runny nose with, kharvas, a remedy that is probably strange to you.

In a bowl with a lid, mix 1 cup of coconut juice or milk, ½ tsp of turmeric, ½ tsp of black pepper, ½ tsp of cinnamon, ¼ cup to ½ cup of jaggery or stevia per taste and ½ liter of colostrum milk.

The colostrums milk in kharvas, along with the other ingredients helps to give your immunity a boost and make your sinuses get rid of the irritant more quickly. Eucalyptus is a common and powerful ingredient used in medication and home remedies alike and is an essential element in how to stop a runny nose.

Eucalyptus is a natural decongestant which helps to speed up the expulsion of the irritant in your sinuses.

Another top performer on our list of how to stop a runny nose is horseradish.

Besides being antibacterial and antimicrobial, horseradish has mucolytic properties that help to drain mucus.

Onion is another common household item that is quite effective when it come to how to stop a runny nose.

Onions are antifungal, antibacterial and antiviral, which means that they’re apt to kill whatever irritant is bothering your sinuses. In addition, onions tend to work at flushing out mucus as well.

Another herbal remedy on our list of how to stop a runny nose is basil.

Basil is also antibacterial, antifungal and antiviral, so it helps get rid of the irritant and not just the symptom.

Honey mixed with cinnamon is one of the simplest remedies on our list of how to stop a runny nose.

Honey is a natural antibiotic, which not only relieves the symptom but also helps fight the cause through antibodies that were produced by the bees as they were making the honey.

A mixture of peppermint and lavender oils is another top performing remedy in how to stop a runny nose.

Both of these oils are antibacterial to help kill the irritant, but they also bring a soothing, cooling relief to your inflamed sinuses. No list of how to stop a runny nose would be complete without the addition of garlic.

Garlic is high in allicin and other beneficial enzymes, which act as antiseptics and help to flush the irritants from your sinuses.

Though turmeric is best known as one of the main ingredients in curry powder, it is also effective for how to stop a runny nose.

Not only is turmeric is an extremely effective antimicrobial herb, but it is as effective as ibuprofen for pain and inflammation.

Steam can play a critical role in how to stop a runny nose as well.

Steam not only soothes the sinus pressure but also assists the mucus in getting rid of the irritant and gets you back to normal faster.

If you’ve ever had watery eyes and a runny nose while eating spicy foods, then you’ll understand how to stop a runny nose with cayenne pepper.

Cayenne pepper is a natural antihistamine, which helps shrink swelling in your sinuses and helps to flush out the irritants that are making your nose run.

Ginger is another of our favorite home remedies for how to stop a runny nose.

Ginger helps to cleanse toxins from your body and especially from your sinuses.

Mustard oil is a less common, but still effective remedy for how to stop a runny nose.

Mustard oil has natural antihistamine, antibiotic and antiviral compounds which make it effective at getting rid of the toxins in your sinuses.

Another of the less common remedies, which is very effective in how to stop a runny nose, is stinging nettle.

Stinging nettle is an especially effective natural antihistamine for the treatment of hay fever and other allergies. You can’t get a more readily available or basic treatment for how to stop a runny nose than salt and water.

Salt helps to thin mucus and to kill micro-organisms in your sinuses.

When it comes to getting yourself back into your normal routine, how to stop a runny nose becomes an important item on your list. Our 15 remedies will work to bring relief to your symptoms and help you get rid of their underlying causes. Make use of one or more of them next time your nose is running out of control and then tell us how well they worked in the comments section below.

Images from depositphotos.com and pixabay.com.

We are a participant in the Amazon Services LLC Associates Program, an affiliate advertising program designed to provide a means for us to earn fees by linking to Amazon.com and affiliated sites. We all adore the ever...

We are a participant in the Amazon Services LLC Associates Program, an affiliate advertising program designed to provide a means for us to earn fees by linking to Amazon.com and affiliated sites. Although ants are...

We are a participant in the Amazon Services LLC Associates Program, an affiliate advertising program designed to provide a means for us to earn fees by linking to Amazon.com and affiliated sites. People who menstruate...