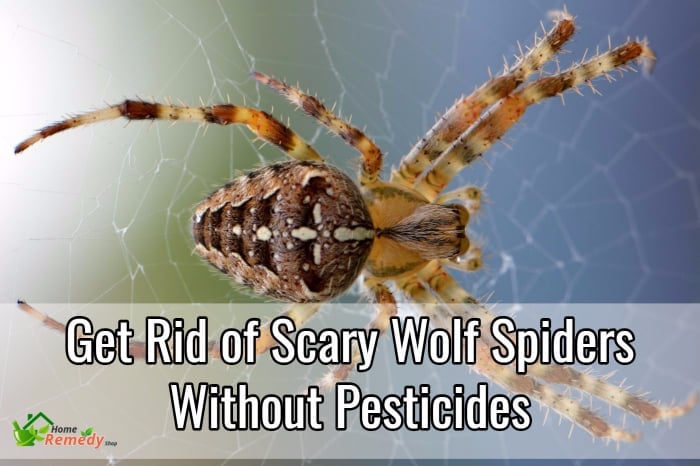 Get Rid of Scary Wolf Spiders Safely Without Pesticides

Over 2300 species of wolf spiders run rampant across the world in a variety of environments. Their bites are painful, but their large size and violent hunting habits make most of us cringe. If wolf spiders are tormenting the arachnophobes in your home, here you can learn how to get rid of wolf spiders in the house once and for all.

How to Identify a Wolf Spider?

What do they look like? According to the  Australasian Arachnological Society, you can identify wolf spiders by these characteristics:

Although the wolf spider’s fangs look a bit scary, there’s nothing to worry about. Wolf spiders do not typically bite humans unless they are provoked. Their venom is poisonous but non-lethal according to the Wolf Spider Organization.

The wolf spiders run and hide when they see anything larger than them. They do not bite attack people, except in self-defense or if they feel threatened. If you happen to get bitten, expect some pain, swelling, redness itching. As mentioned, bites are not lethal, but its also best to seek medical attention to be sure that it’s not a brown recluse bite.

How To Get Rid Of Wolf Spiders?

To think of it, you don’t want to get rid of wolf spiders because they are beneficial. These spiders are not pests, but they do eat pests. They are lone spiders, so there will never be an infestation.  As mentioned earlier, they do not bite or attack as a black widow spider would. Like any other living thing, you can kill a wolf spider by poison damage or crushing it, but there’s no reason to do so. If you see a wolf spider outdoors, you should leave it alone. But if you’re hell-bent on killing spiders inside your house or apartment, you can do these home remedies on how to get rid of wolf spiders in the house.

Getting Rid of Wolf Spiders with Home Remedies

Getting rid of wolf spiders and conquering your fear of spiders is not easy, but with this knowledge on how to get rid of wolf spiders naturally, you’ll be able to reclaim your house from these critters. Once they have moved in, it is hard to deal with spiders creeping around the floors and cabinets of your home. With an abundance of small bugs available in most houses, wolf spiders make themselves at home.

Between natural pesticides and other pest deterrents, there are plenty of alternatives to commercial pesticides that will solve your wolf spider problem. You may already have many of the required ingredients on hand, and others are easily purchased in stores. Here’s how to get rid of wolf spiders that are already living indoors or in your home. 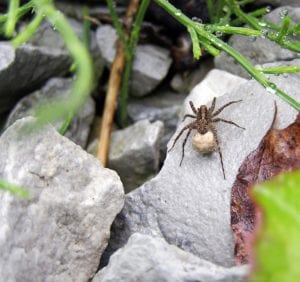 If you’re wondering how to kill wolf spiders, boric acid is a natural wolf spider pesticide that kills insects that digest it by attacking their nervous systems. Boric acid is toxic to people and pets in large amounts, however, so you may want to avoid this option if you have pets or small children.

For households free of inquisitive children and pets, sprinkle boric acid behind appliances, around baseboards, and inside cabinet corners and closets. Only apply a thin layer of the powder, and be sure to avoid applying in areas where food is prepared or served. This method is one of the best ways of how to get rid of wolf spiders in the basement.

Essential oils have a reputation for easing ailments, improving health, and banishing bugs. A peppermint oil solution deters wolf spiders along with rodents and other pests. Because of spiders’ sensitivity to scents and tastes, peppermint oil is an unwelcome odor to them.

Mix five drops of peppermint with about 16 ounces of water in a spray bottle. Add a squirt of dish soap and shake for an easily applied spider deterrent that has a pleasant scent! Alternatively, apply peppermint essential oil directly to cotton balls, then place the cotton balls in locations where spiders are entering the house.

Store-bought glue traps or glue boards serve to catch mice and other small pests, but with a few basic ingredients, you can DIY glue traps to get rid of wolf spiders. Make the traps as small or as large as you’d like, fitting them to the area where spiders visit most.

To make the glue traps, first cut down a cereal box or other cardboard piece so that it’s flat. You will apply the sticky solution to this cardboard platform. Mix one cup of water with one cup of corn syrup in a saucepan and place over medium heat. When the mixture begins to boil, lower the heat and stir until it thickens.

Let the paste cool, then spread it over the cardboard surface. Place the traps in locations with wolf spider sightings, such as along walls or under cabinets, and wait for them to get stuck. Then dispose of the homemade traps where other animals won’t get stuck on them.

In addition to peppermint, pepper and vinegar is also a wolf spider repellent that will drive the creatures out of your home. To make this spicy wolf spider spray, combine half a cup of vinegar with two tablespoons of chili powder or hot sauce. Add a quart of water and shake well, then spray in areas where spiders frequently walk.

While this spray is less potent than commercial pesticides, it’s a safe combination of ingredients that you can reapply as often as necessary. That said, it also requires more frequent application than the store-bought chemical sprays.

Advice ranges from placing chestnuts near spider activity to drilling holes in the chestnuts to allow their essence to escape. Whether it’s the smell of the chestnuts, the acidity of their insides, or another physical connection to the nuts, spiders tend to avoid them at all costs.

Chestnuts are a cost-effective tactic since they are often available for free in your neighborhood. Their effectiveness reportedly lasts years, so this might be a one-time solution to your spider problems.

Because wolf spiders, like all spiders, have sensory taste bud receptors on their legs, heavy scents are likely to annoy them. Along with peppermint essential oil, and pepper and vinegar spray, lemon juice is another household staple which drives spiders away. As spiders walk across the solution, they detect the sour taste of the mixture, which is an unpleasant sensation for their systems.

Mix a water and lemon juice solution (one quart of water plus the juice from one lemon) and spray it along the spiders’ typical route. This will force them to reroute another direction, hopefully exiting out the door and not returning!

Instead of waiting for an infestation, then wondering how to get rid of wolf spiders, take a few preventative measures to keep them from becoming a problem in the first place. Keeping critters out is easier than tracking them down once they’re inside.

If you live on in one of the areas throughout the world known for an overgrowth of wolf spiders, here’s how to keep wolf spiders out of your house.

Clear Your Yard of Clutter and Debris

Where do wolf spiders come from? Outdoors, naturally, but particularly dense and dark areas with lots of hiding places. Letting clutter and debris build up only provides long-term housing for spiders of all species.

Keeping the area around your house free of clutter and debris will go a long way in keeping wolf spiders out of the house. Without a place to hide and stalk prey, wolf spiders won’t stick around.

Remove Shrubs and Plants From Your Home’s Perimeter

Like debris and clutter, shrubs and plants are also great hosts for wolf spiders. Because their prey enjoys plants and shrubs, spiders tend to live in areas where insects run rampant. Keeping vegetation away from the perimeter of your house prevents spiders from moving into your indoor environment.

Seal Any Cracks in Your Walls and Foundation

Wolf spiders range in size from a quarter of an inch to over an inch in diameter. This means they easily squeeze through small cracks in the walls or foundation of your home. Prevent their entry by installing weather stripping around window and door gaps. Silicone caulking will fill remaining cracks and keep the elements out too.

With the cracks in your home adequately sealed, you might think there’s no way spiders or other insects will get in. However, vents that lead outdoors provide an easy entryway for insects and spiders. To reduce the chances of wolf spiders waltzing in through these vents, install insect screens.

Insect screens contain tiny vent holes that allow air to pass through, but deny entry to bugs. Adding screens is the final step in blocking wolf spiders out.

Turn Off Exterior Lighting When Possible

If you’ve switched on your porch light recently, you’ll understand why. Insects navigate by moonlight and will zone in on your porch light because of the similarity in color. This creates a prime buffet spread for wolf spiders, who eat insects as well as smaller spiders.

By eliminating the wolf spiders’ food source, you’re adding another layer of prevention that reduces wolf spiders in the house.

As mentioned, insects follow moonlight at night, so will always move toward your porch light or another exterior lighting. Switching to yellow or sodium vapor exterior lights reduces the confusion for these insects.

Sodium vapor lights and yellow bulbs give off light that most nighttime flying insects cannot see. Therefore, they ignore this light and don’t become dinner for your resident porch spiders.

A wolf spider nest is not like typical spider nests. They do not live in webs that hang from ceiling corners, but rather stalk and jump on their prey. Therefore, it might be difficult to see a wolf spider’s nest when you dust regularly and do not see any webs.

To keep wolf spiders from building their nests, clean regularly behind and underneath appliances. Check cabinet spaces and utility rooms for any signs of wolf spider activity. Keep dirty clothes off the floor, and regularly get rid of items you no longer use. The fewer places for spiders to hide, the better.

Cats are notorious critter chasers, from mice to insects to spiders. If your family is in the market for a pet anyway, you can’t go wrong with a curious and adventurous cat that might stalk wolf spiders for fun. This is a natural way of controlling pests in your home, and provides the cat with entertainment too!

13 Home Remedies for Mange in Dogs