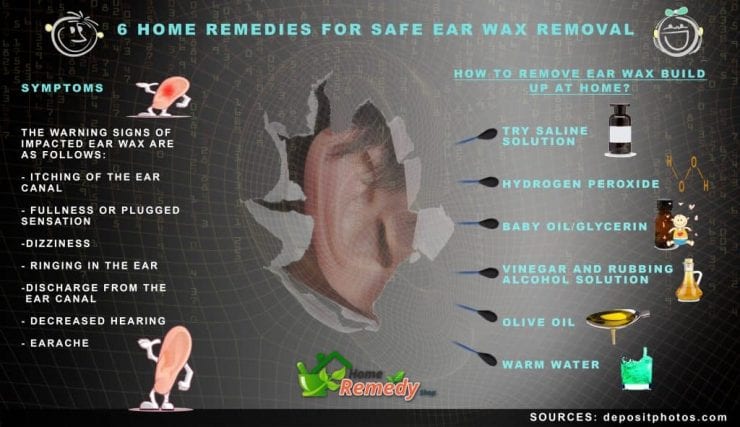 Ear wax is nothing, but a naturally produced substance that protects the ears from bacteria and other external agents while acting as a lubricant for the ear and the ear canal. However, excess build up may cause discomfort, irritation, fullness sensation, dizziness, itching, and even partial hearing loss. Therefore, ear wax can be easily cleaned at home by trying some natural remedies for ear wax removal. Though, there are numerous methods available in the market for ear wax removal, but care should be taken as the ear is a very sensitive part of our body. So, any carelessness needs to be avoided while removing the ear wax.

Ear wax can cause irritation when there is a blockage or impaction due to its accumulation deep inside the ear canal. The wax gets pushed up deeper into the ear while inserting cotton swabs into it, hence, causing blockage and discomfort.

The warning signs of impacted ear wax are as follows:

How to remove ear wax build up at home? Well, there are a lot of home remedies. Some of the common natural remedies to unblock and remove the hardened ear wax are given below:

Mix 1 teaspoon of salt in around ½ cup of warm water until it dissolves completely. Now, soak a cotton ball in the solution and squeeze few drops of it into the ear by slightly tilting your head upwards. Be in this position for some time so that the salty water properly gets inside the ear. Now, tilt your head in the opposite direction in order to drain out the solution from the ear. This is the best ear wax removal solution to get rid of the problem at home.

Mix equal parts of water hydrogen peroxide and water. Make sure that the hydrogen peroxide is not above 3%; otherwise, it may be harmful. Pour a few drops of it into the ear by tilting your head sideways. Let it settle down in the ear for some time. Now, tilt your head towards the opposite side and let the extra solution drain out. This is an effective ear wax removal solution.

Soften the ear wax by putting a few drops of baby oil or mineral oil with the help of a dropper. Let the oil settle in for some time by placing a cotton ball at the ear opening. This prevents oil from oozing out before reaching the ear wax. Take out the cotton ball after some time in order to drain out the extra oil from the ear. Oil helps to soften the impacted ear wax while facilitating the removal of ear wax.

Mix equal parts of white vinegar and rubbing alcohol in a bowl or mug. Pour few drops into the ear clogged with ear wax. This solution greatly helps in getting rid of the ear wax, which can be irritating sometimes.

Pour little warm water in the affected ear. Leave it for a few seconds. Then, drain it out.

Note: Use only clean water.

Instructions to use these kits are provided on their packages. These kits are the better solutions for flushing ear wax.

Note: It is advisable to consult a doctor before using any such kits about the number of times you can use them, and especially if you want to use them for children less than 12 years of age.

Here are the preventive measures to remove ear wax blockage.

Use Food Grade Coconut Oil, Olive Oil, and Mineral Oil which can soften your ear wax.

Also, an ear bulb aspirator will make it easier to remove ear wax.

1. Slightly warm 1-3 teaspoons of oil, make sure oil is not too hot.
2. Lay on your side or with the problem ear facing up.
3. Put a few drops of the warmed oil into your ear canal.
4. Allow it to sit for 10-20 minutes; waiting longer usually produces better results.
Turn your body around, so the treated ear is now facing down with a towel underneath it.
Allow your ear to drain and clean your outer ear from any wax or oil.

Instructions:
1. Warm 1-2 tbsp. of olive oil in a glass container
2. Crush 1 clove of garlic for every tablespoon of oil and place in oil. Mix well and let it sit (without heat) for 30 minutes then drain.
3. Warm the garlic-infused oil
4. Lie on your side with a towel under your head. The ear that needs to be cleaned from wax should be facing up.
This remedy is my favorite for removing ear wax because garlic also kills bacteria, viruses, and fungi if present in-ear.

You can Prevent Ear Wax Buildups.

By adding Omega-3s to my diet, I could help prevent ear wax buildup.
In other words, your ear wax problems could be caused by a simple omega-3 deficiency.
So if ear excess ear wax is a recurring issue for you, there may be a simple solution.
Just consume wild-caught fish every week, or take a high-quality omega-3 supplement.
If you’re on a plant-based diet, however, you can take flaxseed oil instead.