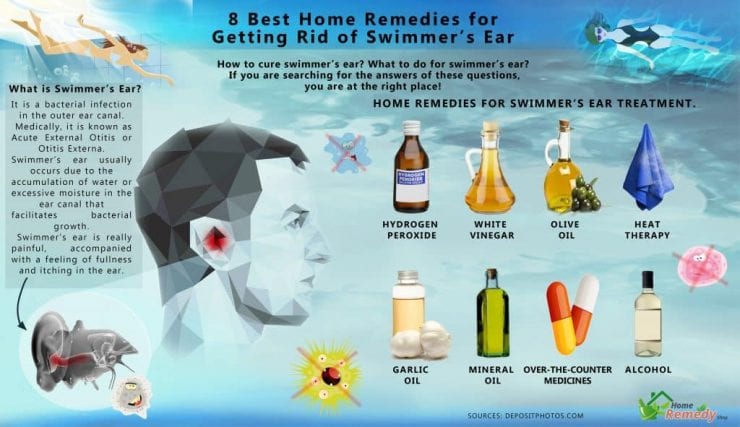 8 Best Home Remedies for Getting Rid of Swimmer’s Ear

If you’ve ever had swimmer’s ear, then you know it. It starts out a little uncomfortable, but soon is causes pain and major discomfort. It is not a condition you can ignore.

This issue gets its name because it is caused by water getting stuck in the ear, which most often happens as a result of swimming. However, you can get it by just taking a bath or shower. The source of the water doesn’t matter.

If you get swimmer’s ear, your main goal will soon become getting rid of swimmer’s ear. It is not something you want to let fester because it can turn into a serious medical issue.

To help you tackle this condition, we’ve put together some home remedies, but do keep in mind that if the condition gets worse or does not start to get better quickly or if you develop a fever or additional symptoms, that you should seek medical care as soon as possible. You do not want to let the condition go as it could lead to serious repercussions with your hearing and overall health.

What Is Swimmer’s Ear?

It is a bacterial infection in the outer ear canal. Medically, it is known as Acute External Otitis or Otitis Externa.

Swimmer’s ear usually occurs due to the accumulation of water or excessive moisture in the ear canal that facilitates bacterial growth.  Excessive production of earwax, a narrow ear canal and swimming in bacteria-containing water are some of the factors that expose you to the risk of developing this condition.

Swimmer’s ear is really painful, accompanied with a feeling of fullness, and itching in the ear. It is not a serious problem if taken care of right away.

The major causes of swimmer’s ear are:

Depending on the stage of the condition, the symptoms may vary from mild to severe.

These symptoms are seen during the initial stage of swimmer’s ear.

These signs are seen during advanced stage.

Here are some home remedies for swimmer’s ear treatment. Consult a doctor for proper medication in case of moderate and severe symptoms.

One of the most common swimmer’s ear home remedies is hydrogen peroxide. Pour four to five drops of hydrogen peroxide into the infected ear. Let it settle for some time, and then drain it out by tilting your head downwards.

Pour few drops of white vinegar in some water, and put this solution into the infected ear. White vinegar gives a quick relief from pain and itching due to the infection. You can also mix white vinegar with rubbing alcohol for a speedy recovery from swimmer’s ear.

Pour few drops of warm olive oil in the infected ear with a dropper. Its antiseptic properties will reduce the infection. It gives fast relief from swimmer’s ear.

Dip a washcloth in hot water or take a warm water bottle and place it against the infected ear. It is a good remedy for swimmer’s ear pain relief.

This is another good natural cure for swimmer’s ear. Grate some garlic and soak it in the olive oil for a night. Strain it the next day, and put at least 3 drops into the infected ear after warming it up a bit.

This is another great remedy for swimmer’s ear. Pour few drops of mineral oil before going for a swim. This reduces the risk of bacterial growth in the ear canal.

You can take over-the-counter drugs, like acetaminophen or ibuprofen, which are good home remedy for swimmer’s ear pain.

Insert rubbing alcohol in the troubled ear with the help of a dropper. To distribute the alcohol evenly, move your head around. Then, tilt your head downwards to drip out the alcohol.

Chamomilla, Hepar sulphuris, Aconitum napellus, Mercurius solubilis, Pulsatilla, and Belladona atropa are some of the homeopathic medicines for curing swimmer’s ear. You should keep in mind the symptoms while taking any medicine. Though, these medicines are natural and safe, but it’s better to consult a doctor before taking them.

As you can see, there are many great ways to prevent getting swimmer’s ear, but if you end up an unlucky victim, then you also have various home remedies to use to treat the condition. Do remember that if you have extreme pain or signs the condition has progress to severe, you should see a doctor before trying home remedies.

Let us know how our remedies worked for you. Which ones did you like the best? Sound off in the comments.