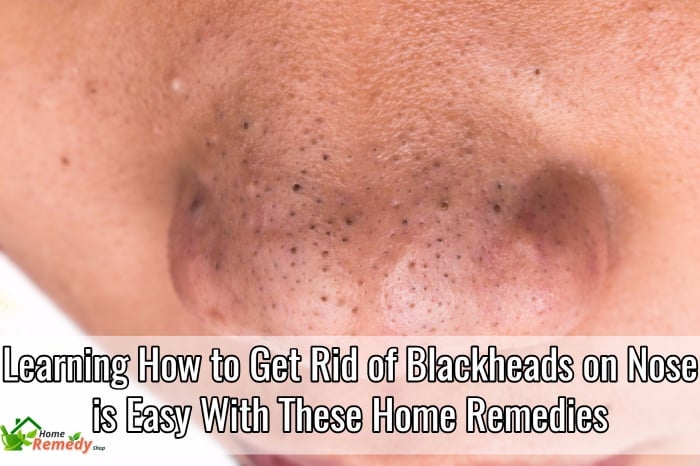 Getting rid of blackheads on nose is a top priority for most people who deal with acne. But blackheads are quite misunderstood. Many people assume they have a dirty face and try to cleanse and scrub their blackheads away without success.

So, if you’re wondering how to get rid of blackheads on nose, here’s everything you need to know including how to remove blackheads naturally.

Blackheads are a kind of acne. They’re recognized by their appearance and they look like small bumps with a dark or black surface; hence, the name ‘blackheads’.

Many people find blackheads are most common in the t-zone of their face, including their nose and forehead. However, blackheads don’t discriminate. They can be found on your arms, neck, back, chest, shoulders, and even your legs. Both women and men will suffer from blackheads at one point in their life.

Blackheads have many causes. But it’s important to note that just because they have a dark or dirty appearance doesn’t mean your skin is dirty.

The dark color comes from exposure to air (oxidization) because the skin on the bump is open. Though, the dark color is also found in the oil found in your pores. So, removing blackheads on nose isn’t simply about scrubbing dirt off your face.

Although it is not necessarily a product of poor hygiene, there are things that you can do to help minimize your blackheads. Two of these include daily cleansing and exfoliating. When you can cleanse and exfoliate your skin, you give it the opportunity to breathe and be healthy. There are many common causes of blackheads that we will get into in just a moment, but after each of these causes, you may want to make it a point to cleanse your face right after.

A simple soap and water scrub will do, but for those who suffer from oily skin, you may want to invest in a cleanser that specializes in just that. If you pop into your local drugstore, you are sure to find plenty of cleanser options that are targeted towards your specific skin type.

Here are some of the most common causes of blackheads.

Blackheads are a type of acne. So, if you struggle with acne generally, you’re more likely to deal with blackheads. Though, unlike other types of acne, blackheads aren’t caused by bacteria, so they don’t become inflamed. Instead, they’re often just oil and dead skin cells blocking your pores.

Blackheads are caused by a buildup of oil and dead skin cells in your hair follicles. If your skin produces too much oil, you’re more likely to struggle with blackheads. This can be an easy remedy for some as there are plenty of retail solutions for too much oil buildup on skin. From face wipes to moisturizers geared towards just that, finding the right treatment plan for oily skin can help to reduce your blackheads.

Because blackheads are a central part of acne, they may be impacted by the side effects of prescription drugs that cause acne. Drugs like androgenic steroids, anticonvulsants, barbiturates, corticosteroids, DHEA, and lithium all see an increase in acne as a side effect, which may also include an increase in blackheads.

However, prescription drugs are typically not the main cause of acne. In fact, the true cause of acne has yet to be established.

While the true cause of acne is not yet known, doctors do know that hormones play a major role in acne. For example, acne fluctuations are common during puberty. Women are also susceptible to acne, and hormone changes through their menstruation cycle may play a role.

Generally, though, hormonal acne isn’t caused by hormones alone. The combination of hormone changes with bacteria or clogged pores can cause acne. If hormones are acting alone, it is likely not because of the hormones but the underlying medical conditions play a role.

Makeup also plays a contributing role in the formation of acne and blackheads.

Learning how to get rid of blackheads on nose also means finding the right makeup for your skin. But makeup isn’t the only culprit behind clogging. Dirty tools and sponges may carry bacteria that may cause breakouts and blackheads on nose. The best way to avoid this is by keeping up with regular cleaning of your makeup brushes and applicators. If your application tools are a year old, then you will want to toss them out and get new ones. But generally, you want to make it a point to clean your brushes out about once a week. This will truly prevent product buildup and bacteria growth.

Additionally, you want to make sure that every day that you apply makeup, you remove it properly at the end of the day. If you go to bed with your makeup on, you are further clogging your pores and are promoting the growth of blackheads.

Although sweat is gross, it doesn’t cause acne because there’s no bacteria in sweat unless you let it sit there for a while.

So, if your face is sweaty and you wipe it away, it’s not the sweat causing your acne. However, if your back gets sweaty and you don’t change or shower for a while, you might find you start to develop bacne or black heads on back.

How to Get Rid of Blackheads on Nose

Blackheads are a part of daily life for most people, which is why so many people have come up with their own variations on the best way to remove blackheads from nose.

These methods vary substantially both in cost and success. However, the best product for blackheads doesn’t need to be expensive or rare. Some of them are natural and can be found in your kitchen.

Lemon juice is an astringent, which is ideal for removing the dead skin that blocks your pores and creates blackheads.

Because lemon is also a citrus fruit, it also contains vitamin C. Vitamin C is good for your skin because it boosts natural collagen production and keeps your face smooth and free of scars and wrinkles.

To use lemon juice on your blackheads, add a teaspoon and dilute it with water. Use a cotton ball to apply it to the affected area and leave it there for 10 minutes. Be sure to rinse your face afterward.

Honey is a natural antibiotic and goes hand-in-hand with acne treatments. Some people choose to combine it with spices like cinnamon, but it can also be used on its own.

Simply wash your face and hands and wait for both to dry. Then, use your fingers to apply honey over the area with blackheads. The stickiness of the honey will draw out the impurities in your pores thereby removing your blackheads.

If you’re wondering how to remove blackheads on nose without going to the store, then this is your method.

Most people have baking soda in their home for various purposes. Combine 1 tablespoon with some water to get a paste-like consistency. Then, apply it to the area where you want to and wait for it to dry.

Rinse off the paste with warm water after 10 minutes. Feel free to repeat weekly.

Common Indian spices tend to work well in face masks. Fenugreek is no exception. If you’re still wondering how to get rid of blackheads on nose, this is a good option.

Fenugreek is good for acne, eczema, and removing blackheads.

Apply the paste to your blackheads or to problem spots. Keep the mask on for 20 minutes before washing it off with warm water.

This mask is also suitable for leaving on overnight if you choose. You can also substitute distilled water for milk for extra calming action.

Create a cinnamon and honey mask to remove blackheads and improve circulation. It’s one of the first masks people learn about when they find out how to get rid of blackheads on nose.

Stir some cinnamon powder into your honey and apply it just like a honey mask. For extra pull, add cotton strips to the mask and allow them to dry for three minutes before removing the strip.

Oatmeal is another product most people have at home. Turn it into one of the best products for blackheads simply by cooking it as you normally would. Let it cool to room temperature. Then, apply it to your face for 15-25 minutes before wiping it off.

Use cornmeal similarly to the way you’d use baking soda. Mix it with some water to create a paste and spread it over the breakout for blackheads on nose removal.

Green tea has many antioxidants and vitamins good for overall health. It’s also ideal for reducing inflammation in your skin.

Make a cup of green tea and let the tea bags steep for an hour. Once the tea is cool, apply it to your face with a cotton ball and allow it to dry. Rinse with water afterward.

Epsom salt scrubs away impurities and it’s a common solution when people ask how to get rid of blackheads on your nose.

To use them, add a teaspoon of Epsom salt and three to five drops of iodine to half a cup of boiling water.

Once combined, let the water cool. Then, apply it to your face with a cotton ball and let it work for 5 minutes before rinsing. Follow up the mask with an astringent.

An egg white treatment is a simple mask to use for removing nose blackheads.

Simply separate the yolk from the white. Then, paint the white on your face in a thin layer. To create a more effective blackhead treatment, put some tissue on the egg white and press it lightly. Then, paint a second layer of egg white on top and add more tissue.

If you’re wondering how to clear blackheads with this mask, wait until the mask has dried. Then peel off the mask. Remove any leftover egg or tissue using warm water.

An olive oil and sugar scrub is an exfoliating measure to help remove those dead skin cells and oil. Add 4 tablespoons of olive oil to a cup of sugar and combine well.

Wash your face and give it a scrub with the olive oil and sugar mixture.

Toothpaste is a common way to remove blackheads because it dries out excess oil. Be wary of this method if you already have dry skin.

Simply spread a bit over the blackheads and leave it on for 15 minutes.