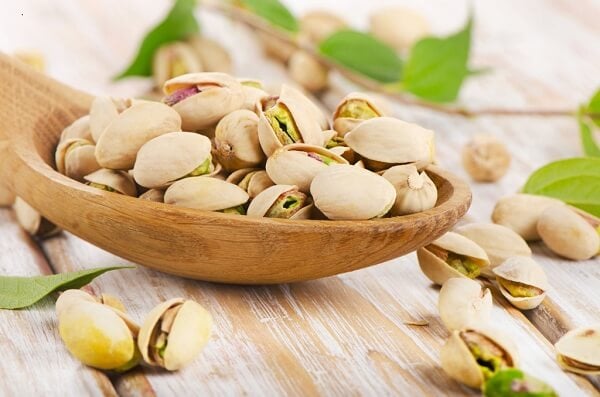 Health Benefits of Pistachios – the Green Nut with a Purpose

Besides from being one of the most delicious nuts available to us, pistachio is packed with nutritional value, vitamins, and anti-oxidants. It helps you watch and balance your weight, alleviates heart conditions, fights diabetes, and is the perfect post-workout snack. As far as health benefits of pistachios go, there’s nothing this little green nut cannot do. In fact, did you know it’s not even a nut, but technically a fruit? Here are all the details and more on the wonderfully fragrant pistachio.

Pistachios One on One

As a member of the cashew family, pistachios grow on small trees that were originally found in Central Asia and throughout the Middle East. Believe it or not, pistachios are one of the oldest types of nurturing known to man. Archaeologists have found evidence of our ancestors eating these nuts almost 9000 years ago. It was described by great writers of the Antiquity, such as Pliny the Elder and Anthimus. It is believed that the tree originated in Syria and was later on introduced to Italy and Spain by the Roman conquerors, in the first century AD.

Today, pistachio is cultivated and consumed around the world. Turkey, Iran, and the United States are the biggest producers on the planet, accounting for a staggering 83 percent of the world production.

As far as consuming them goes, pistachios are typically roasted and salted or eaten fresh, without the hard outer shell. Apart from that, the nut is used to make ice cream, a traditional Indian iced dessert called ‘kulfi,’ a traditional Italian ice cream called ‘spumone,’ as well as other types of classic Neapolitan ice creams. It is also turned into a paste or used in various Middle Eastern desserts rich in hundreds of years of tradition, such as baklava, halva, and kataif.

Although it doesn’t seem to have anything to do with these dishes or desserts, China is the world’s largest pistachio consumer.

Many people have expressed safety concerns when it comes to pistachios, claiming the nut is, in fact, toxic and unfit for human consumption. The truth is somewhere in the middle. While pistachios per se are not dangerous at all, there is some concern regarding the poorly cultivated ones. Just like with any other seed, if not treated and harvested correctly, pistachios will contain a high level of aflatoxin.

It’s a chemical with a powerful carcinogenic influence on the human body, which is produced by a mold. The contamination can come from the soil itself, by it’s mostly there because of poor storage of the pistachios and the fact that they were exposed to pests and not cleaned afterward.

Building on this idea, you need to be careful from where you buy your pistachios. There have been reports of severe illness bouts as well as deaths, caused by aflatoxin, in different parts of the world. In 1997, the EU banned imports from Iran, for the first time history, because their pistachios were contaminated. It was only lifted after the country improved the levels of quality and passed the food safety inspections.

Pistachios are known to reduce the levels of bad cholesterol in the body, also known as LDL. Apart from that, the nut also increases the levels of good cholesterol, HDL. This rebalancing of our cholesterol level ultimately leads to the prevention of heart diseases. Pistachios can also make the heart in itself stronger because they increase the strength of the nerves.

Eat a handful of pistachios every day, so that you can enjoy its benefits and keep heart problems at bay. If cardiovascular difficulties are the reason you want to turn to the natural remedy that is pistachios, it’s best if you eat the nuts raw and unsalted, because salt aggravates heart conditions.

Since pistachios have both Vitamin A and Vitamin E, as well as anti-inflammatory properties, you can eat them to reduce inflammation in the body. Studies conducted by the Pen State University on a group of 28 healthy men and women all between the ages of 30 and 70 has shown that a diet rich in this delicious green nut can, in fact, reduce inflammation at a cellular level. 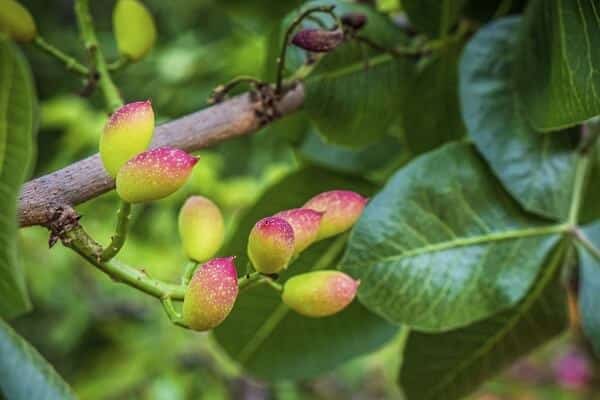 #3. The Benefits of Pistachios May Prevent Diabetes

One cup of pistachios contains more than half of the required daily dose of phosphorus. Therefore, since it is known to have the ability to prevent type-two diabetes, it’s safe to say it’s the green pistachios to the rescue once more. Apart from this, the glucose you can find in pistachios helps break down the proteins and convert them into amino acids. The result is a higher level of tolerance to glucose.

#4. Helping the Nervous System and the Blood Stream at the Same Time

Another essential vitamin in which pistachios are abundant is B6. It is typically beneficial to the human body in two ways. First of all, it carries oxygen to the blood, therefore, increasing the levels of hemoglobin. However, you must remember to eat pistachios every day if you want it to aid your blood stream in this way.

Secondly, vitamin B6 is also favorable to the nervous system. This system’s messaging molecules are called Amines, and they need amino-acids to develop. In turn, the latter are tightly linked to the presence of Vitamin B6 in the body. It builds up into a kind of ‘sheath’ around the nerve fibers, called myelin. The messages themselves pass through the nerve fibers from one particular nerve to its adjacent one. By building amino acids, Vitamin B6 helps nerve impulses transmit in a proper way through the nervous system.

Looking at all the information above about the nervous system and the blood stream, one cannot help but see how crucial it is. The solution to a Vitamin B6 deficiency or to improving the way these paramount systems work could be as simple as eating a handful of pistachios every day. The health benefits of pistachios become truly outstanding.

This affliction is an eye disease that has always been linked to old age. It affects the human eye and slowly reduces the vision. In the end, it renders adults unable to read and work accurately. Apart from that, patients suffering from macular degeneration can also stop recognizing other people.

Luckily for all of us, both the compounds can be found in pistachios.

Because Vitamin B6, in which pistachios are very rich, increases the hemoglobin count in the blood whenever you eat the nuts, the blood gets enriched in oxygen. It finds its way towards the brain, making the supreme organ healthier and more active.

#7. Health Benefits of Pistachios Regarding the Skin

As far as the skin is concerned, Vitamin E is the star. It’s a natural antioxidant, which you might have seen countless times on the ingredients list of face creams, masks, cleaning gels and so on. Fortunately, you can also introduce it into your body, and therefore, to your skin, by simply eating pistachios.

Vitamin E also protects the skin from the very harmful UV rays of the sun, turning the epidermis a lot more beautiful and healthy.

Another almost miraculous effect Vitamin E has centered on is anti-aging. It fights the maturing process itself and keeps the skin looking young and fresh as long as possible. Apart from that, pistachio oil is high in emollient properties that will maintain the skin moisturized. It will leave your skin looking supple and hydrated since it fights against flaking. The health benefits of pistachios and pistachio oil can be enjoyed in oil form as well, for aromatherapy and massages. 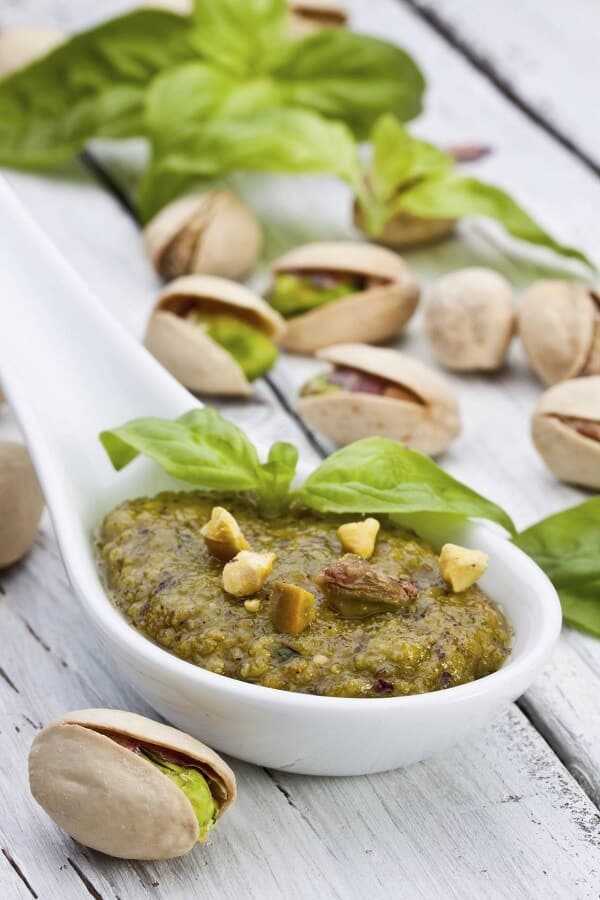 #8. Health Benefits of Pistachios Regarding Hair

If pistachios do so many wonderful things for the skin, it was only natural they would repeat the process for the hair as well. Here are a few of their benefits in the capillary area.

How Do You Select and Store Pistachios?

You already learned all the amazing health benefits of pistachios, and now you want to include them in your daily diet so that your body can start enjoying them as soon as possible. But, do you know how to select the best pistachios and how to store them properly so that they don’t go stale? Here are a few things you should be aware of when it comes to these delicious nuts.

Are Pistachios Healthier Than Almonds?

There are so many health benefits of pistachios, but these aren’t the only nuts that are beneficial to your health. We’re going to compare the nutritional value of both nuts to conclude which nut you should prioritize to become the healthiest version of yourself.

To begin, both nuts contain very similar levels of fat, protein, and fiber, and they don’t contain sodium and cholesterol.

However, though the results aren’t significant, pistachios contain vitamin A and C which isn’t present in almonds. Pistachios also provide two percent more iron, though almonds contain nearly three times as much calcium.

Aside from our long list of health benefits of pistachios, here are some helpful tips on how to include these incredible nuts in your daily diet.