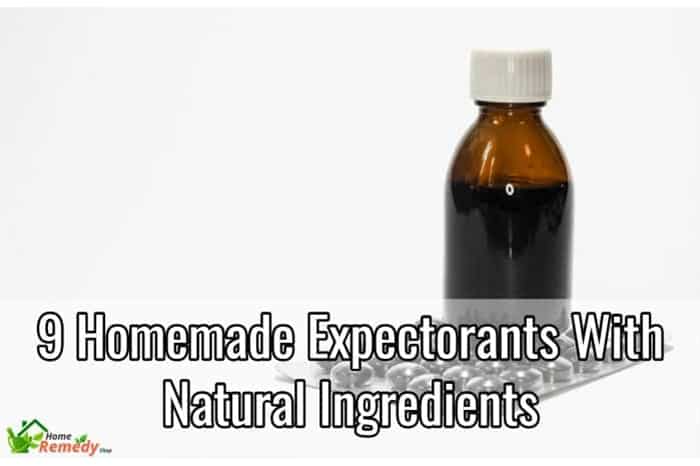 A cough can make it difficult for you to sleep. And, at work, it can disturb your coworkers. If you feel like you are coughing a lot and nothing seems to be coming up, you may need an expectorant. It increases the water content of your mucus, thins it out, and makes your cough more productive. Below, we will look more closely at what expectorants do and some natural remedies you can find in your household.

So, what is expectorant? It is a kind of cough medicine that loosens and thins mucus in your lungs, which makes for more productive coughing. Cough expectorants differ from cough suppressants, which decrease a cough, by making you cough more.

One of the most popular expectorants is guaifenesin, which is fund in products like Robitussin DM and Mucinex. It is designed to thin secretions in the airways so that they can be coughed up more effectively. This is done by lubricating the airway passages.

They help rid your airways of bacteria and other debris as well as reduce your risk of infections and assist your body with recovering from infections. There is some evidence that they are helpful for treating chronic bronchitis along with chronic obstructive pulmonary disease.

Expectorants will not treat the infection that is causing symptoms, but they will make you feel a little better while your immune system does its job and will allow you to get a good night’s rest.

Signs You Need an Expectorant

The main sign that you need an expectorant is that you feel like you have mucus accumulated in your bronchi, trachea, lungs, or airways. When you try coughing, the mucus does not seem to want to come free. The clearance ability is hampered because it is bonding to surfaces.

An increase in mucus production in the upper respiratory tract is a sign of the common cold and many other ailments. If the excess mucus is in the bronchioles and bronchi, you may have bronchitis, influenza, or asthma.

You may also experience thickening mucus if you have misdiagnosed yourself and taken too many decongestants. Other diseases that are associated with mucus buildup in the airways are COPD and cystic fibrosis.

If you experience thick mucus in your airways that will not go away over a long period of time, you should consult with your health care professional since it may be a sign of something more severe.

Natural Expectorants to Try At Home

If you are fairly certain you have picked up a cold and would like to get rid of your excess mucus that no amount of coughing seems to get rid of, rather than shelling out big bucks for over-the-counter cough medicines with mixed results, you should consider some of these herbal remedies:

One effective natural expectorant is the leaf of the evergreen climbing plant ivy. The ivy leaf features a compound called saponin, which researchers believe helps make mucous thinner so it is easier to cough up. As a matter of fact, one recent study found that combining the herbs of aniseed, dry ivy leaf extract, marshmallow root, and thyme improved coughing symptoms. The conclusions of the study are somewhat limited because it did not break down the combination into its individual parts, and it did not include a placebo.

Many other studies have proven ivy leaf to be an effective cough treatment, and recent studies have helped us understand how it works. Most grocery stores carry ivy leaf teas.

The reason you are coughing so much with little success in loosening up that mucus is because the mucus is simply too thick. A natural thinner is water. But, how can you get the water into your airways to mix with your mucus without drowning? One all-natural and easy way to loosen up chest congestion is to take a steamy, hot shower.

By loosening up mucus in the airway, moist and warm air can help relieve a stubborn cough. Of course, showers are not the only solution. You might also try using a humidifier to add moisture to the air you breathe or head to a steam room if you have access to one.

Eucalyptus contains several compounds with antispasmodic, decongestant, and anti-harmful organism properties. A compound known as cineole is the source for this broad combination of benefits. Since cineole can ease a cough, fight upper respiratory problems, and serve as a DIY expectorant, it is generally cited as the active ingredient in eucalyptus.

Eucalyptus is sold as an ingredient in over-the-counter products as well as a standalone supplement. Eucalyptus is used for temporary relief of nasal congestion, coughs associated with a cold, and for rheumatism. Never apply undiluted eucalyptus to your skin or take it by mouth.

Peppermint is commonly used as a flavor for toothpaste, tea, and gum. Yet, it could be just what the “home doctor” ordered when it comes to treating your cough naturally. The compound called menthol is found in peppermint. Menthol is known to help loosen phlegm, break up coughs, and thin mucus. If you are having trouble getting that thickened mucus out, you may want to consider peppermint tea. It is safe and available in most grocery stores. There are no side effects, and unless you are allergic (a somewhat common allergy), it poses no danger.

You can also make your own tea by adding a few leaves of fresh peppermint to hot water. You should never ingest pure menthol, though, since it is considered poisonous. Some people may contract a rash if peppermint oil or menthol is applied directly to their skin. Test the oil on a small area of your skin first, and wait a day or two to see if there is a reaction if you want to safely try it.

You may have had a hippie friend or older relative tell you to drink sage tea the last time you were hacking up a lung. This is because sage tea has been shown to sooth the symptoms associated with coughs and colds. It will ease a clogged nose and minimize throat irritation.

Simply steep two teaspoons of fresh sage leaves in one cup of hot water to use sage tea as a decongestant or home remedy expectorant. After you let the tea steep, add honey to improve the taste (and for added help). You can drink sage tea up to three times per day. Try combining thyme leaves with sage leaves for increased potency.

Did you know that licorice is not just a popular natural flavor, but that it is also a strong herb with a broad array of health benefits? Licorice is a mild natural laxative along with boasting excellent hepatoprotective properties. More importantly for you, it will help that hacking cough, swollen sinuses, and runny nose. It also soothes inflamed lungs and itchy throats while making your cough more productive.

Drink licorice as a tea to use it as a decongestant or homemade expectorant. Boil half a teaspoon of licorice root in plain water. Allow it to cool, then take the tea three times daily. Your local health foods store will also offer licorice lozenges.

Horehound comes highly recommended by herbalists when it comes to treating coughs and colds. This natural decongestant is ideal for treating hacking cough and a dry cough. Plus, it will ease chest tightness associated with dry cough. The herb also soothes irritated lungs and suppresses coughing.

According to clinical tests, the active compound in horehound is marrubin, which has been shown to stimulate bronchial secretions. You will likely have to take horehound tablets instead of the fresh herb because it is incredibly bitter. Your local health store should have horehound tablets.

Honey is natural, soothing, and delicious. Plus, you can use it to loosen up the mucus in your chest. But, the effectiveness of this sweet bee product on treating coughs has yet to be tested in a good amount of studies. However, recent research found that honey can improve sleep and relieve coughing in children with upper respiratory infections. The study did have a few methodological flaws, though, in that it was based on self-report by parents in questionnaires.

Mix a cup of warm tea, water, or milk with one teaspoon of honey just before bed. You might also try just downing the honey on its own. Due to the risk of botulism, never give honey to children under the age of one year.

As you already know, the reason the mucus is stuck in your airways is because it is too thick, and water is the ultimate natural thinner. In addition to breathing in steam, you should also keep yourself hydrated. In general, your body will function at its best when it is hydrated. So, when you have a cold or a cough, increase your fluid intake. A great way to get more fluids is to drink herbal tea or just plain water. Since they often cause dehydration, try to avoid drinking alcohol and caffeine when you have a cough.