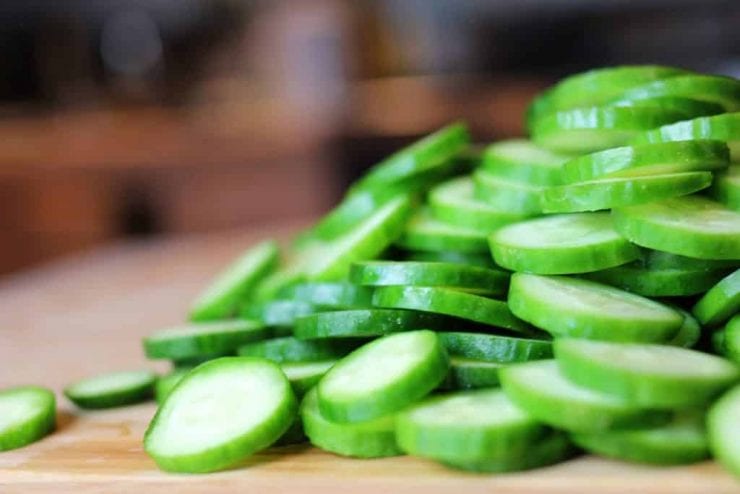 The most widely spread piece of information about cucumbers is the fact that they are made almost completely out of water. 95 per cent to be more exact is, probably, a fact that everyone can state about the green vegetable with scientific accuracy. But there are a lot more benefits to it that we give it credit for. So here are the main 7 health benefits of cucumber.

Also known by its Latin name, Cucumis Sativus, the cucumber belongs to the Cucurbitaceae family, which means it’s related to zucchinis, watermelons, squashes and pumpkins. Originally, it came from Southern Asia, but it quickly spread and it can now be found and cultivated on all continents. There are three main types of cucumbers, called slicing, pickling and burpless. Knowing the varieties is important for choosing the perfect type of cucumber for your purpose.

Included in these three main cucumber types are a series of different varieties. The fruit vary in length, color, girth and they also present mild taste differences. However, they all share the same benefits.

As stated above, all cucumbers are made up of 95.2 percent water. Using math to prove a point, we can correctly say that 5 ounce of the vegetable hold 150 ml of water. This means almost 30 percent of your daily needs, solely by food intake. Water is essential for the good functioning of the human body. Made primarily out of water itself, all our body parts need the liquid in order to work at optimum rates. Cells need water to regenerate and grow, the same as tissues and organs. Water is also used to maintain the perfect body temperature, through sweat. It’s also used to eliminate waste and toxins, again via sweat and urine and to lubricate joints. Therefore, using such an easy and delicious way of consuming water makes cucumbers the ideal solution to stay hydrated.

Having glowing, flawless skin comes via hydration as well, because when it comes to healthy and beautiful skin, we all know moisture is our best friend. Doctors always recommend us to first drink plenty of water and then to think about crèmes and moisturizers.

But that’s not the only reason cucumbers are good for your skin. They contain a compound called silica. This is the main ingredient when it comes to acquiring very strong and well-working ligaments, tendons, bones, cartilages and connective tissues. Silica aids skins as well, which is why dermatologists often recommend it for bright, shiny and healthy skin.

One thing you might have noticed as far as the thriving relationship between cucumbers and great skin goes is the high number of cosmetic products on the market containing or actually based on the vegetable itself. The health care industry has long picked up on how good cucumbers really are for our complexion and have introduced it in day to day hygiene products such as moisturizers, micellar water, toners, cleansing milks, as far as the face goes and soaps, shower gels and body lotions for the rest of our bodies. But cucumbers also treat more serious ailments of the skin, like sunburn and swellings under the eyes.

One amazing thing about the cucumber is that it’s a perfect natural blend of protein and water, which is exactly what our bodies need to work correctly and healthy. Fiber is constipation’s natural enemy and water keeps our kidneys in perfect condition. One should always try to search for natural fiber sources, such as the cucumber, rather than eating, let’s say, a bran muffin. It’s a lot healthier, more natural and weight-friendly. Also, the water contained in the vegetables is naturally filtrated and pure, which means it ranks first among the usual bottled waters we drink.

Cucumber skin is very rich in antioxidants, vitamin A and fiber, so make sure you eat the whole thing and not peel it, as this means a better nutrition gain.

The link between cucumbers and diabetes has been discovered many years ago and used ever since. The vegetables contain a hormone which the beta cells need when they produce insulin. Cucumbers also have a zero glycemic index, which means that the carbohydrates they contain are very easily digested and tolerated by diabetics. This basically translates into the fact that cucumbers help keep the glucose level at optimum rates. The easiest way to ward off diabetes and its effects via the natural benefits of the cucumber is by introducing spiny sea cucumber extract powder into your diet. This can actually be purchased in most stores, not just in drug stores.

Sea cucumbers are tiny sea creatures with a tough leathery skin and elongated body, very much resembling a vegetable cucumber, which is what brought on their name, after their discovery. They are completely edible and that is the reasons they are either harvested or cultivated. The powdered sea cucumber extract is normally introduced into oils, creams and cosmetics, to make it easier for everyday use and to bring added value to sea cucumber health benefits.

Another amazing quality the cucumbers possess is their rich potassium content, 125 mg per cup, to be more specific. Potassium is a very well-known factor in the ever going fight against high blood pressure. This condition can be caused by a number of reasons, most of each are products of our high-speed, highly technological day-to-day lifestyle. Stress, bad dieting habits, increased volume of work, deadlines, insomnia, they can all lead to high blood pressure. Building on this, high blood pressure may lead to strokes and cardiovascular disease.

But studies are now showing how potassium helps lower blood pressure and reduce the risk of heart disease. As shown, a very easy way to increase your potassium levels is by eating a cucumber salad every day or by drinking cucumber juice.

Also known as halitosis, bad breath is normally caused by bacteria buildup in the mouth region. We fight it by simply washing our teeth in the morning and in the evening, but during the day it might not be enough. We don’t usually get the chance to brush during the day, so cucumbers come to the rescue once more. Because they are so rich in water and fiber, as previously shown, they will increase saliva production in your mouth. The secretions will quickly and easily wash away the bacteria growth that causes halitosis.

As a bonus, the process is extremely beneficial not just because it wards off bad breath, but because the bacteria in your mouth can cause serious infections as well. A drop of saliva on an open wound can lead to further complications, if the mouth has not been washed properly or especially hydrated. But juicing a cucumber and drinking the liquid fights it all off.

Another important factor to take into consideration regarding cucumbers is the role they play in relieving pain. Apart from water, fiber and vitamins, they are also rich in flavonoids and tannins. The former are a type of anti-inflammatory substance, while the latter reduce the release of free radicals and alleviate pain. This is the reason why cucumbers are used as a cure for headaches, as shown by the Journal of Young Pharmacists.

Apart from these main health benefits cucumbers have on the human body, they are also very cooling, which is why we always receive the recommendation to drink cucumber juice, lemonade or cucumber infused water during the summer. Cucumber seeds are mostly known to have this effect, especially when left to infuse in the juice, adding to the health benefits of cucumber juice. The vegetable is also diuretic, thanks to the high fiber and water content, which means that when having trouble with constipation, it’s better to consume some cucumber before rushing to pills. Acne is another ailment cucumber is a worthy opponent of. Most anti-acne lotions and moisturizers are based on it.

Here is the nutritional information for one cup of cucumbers:

Plus, as well as their low-calorie package, cucumbers also pack a lot of important nutrients including:

According to the Journal of Aging Research and Clinical Practice, cucumbers contain lignans which are a group of polyphenols. These can be helpful in treating estrogen-related cancers. They also contain some other antioxidants such as flavonoids and carotene. These can be helpful for fighting inflammation and can protect the cells in your body from chronic diseases.

Cucumbers are the fourth most cultivated vegetable in the world and it’s worth mentioning that, just like the tomato, they are also, technically, a fruit. But they are generally classified as vegetables because of their use. Knowing detailed information about them as well as the health benefits of cucumbers will help you make wise decisions when it comes to your ailments, your bodily functions and needs and your food intake. Cucumbers are also very easy to cultivate, so, in order to satisfy your needs, you might consider growing them yourself.