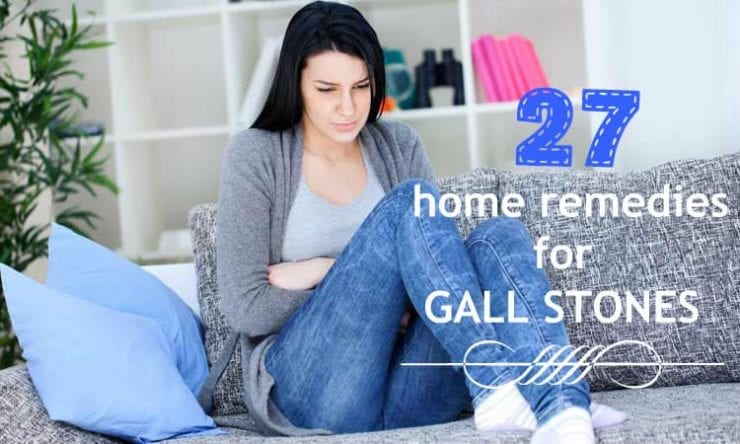 Gallstones are a small, hard crystalline mass that are formed in the gallbladder or the bile ducts from cholesterol, bile pigments, or calcium salts. They cause severe pain as well as blockage of the bile duct. Gallstones may be caused by a number of factors, which include obesity, heredity, and due to the capability of the gallbladder to contract (motility).

There are several symptoms that may be noticed in a person suffering from gallstones such as pain in the upper abdomen, clay-colored stools, vomiting, nausea, backache, yellowing of the skin and eyes, and indigestion. The pain may either stay for a longer interval of time or vanish away within a few seconds.

Gallstones are popular among overweight/obese people, particularly women. Women taking oral contraceptives or undergoing high-dose estrogen therapy, expecting women, and people who have lost excessive weight recently are at the higher risk of developing gallstones in their later life. Diabetes and hereditary factors also cause gallstones.

Try out the below-given home remedies for quick relief from gallstone pain.

Squeeze juice of 4 fresh lemons and drink it on an empty stomach every day. It is of great help in removing the gallstones naturally.

This is a widely used remedy. Drink plenty of water to eliminate the gallstones.

Mix the juices of carrot, beetroot, and cucumber in equal proportion and drink it at least twice a day for 2 weeks.

Take half glass of water. Add half glass of pear juice and two tablespoons of honey to it. Stir it well. Drink it at least three times a day.

Drinking half glass of wine daily can prove out to be helpful in keeping the gallstone at bay.

It allows the gallstones to move out through the bile duct. Empty 1 teaspoon of Epsom salt into normal water and drink it in the evening for a couple of days.

For quick relief, make use of a heating pad, hot water bottle, or other heat packs. Place it over your stomach, directly on the gallbladder for 20 to 30 minutes. This will temporarily relieve the pain. Or else, you can also soak yourself in a hot bath water.

Another useful remedy to quickly reduce the pain linked with gallbladder is castor oil. Castor oil soothes the inflammation. Soak a clean and dirt-free rag in cold pressed castor oil. Place it over the aching gallbladder. For more effective results, place a plastic and hot water bottle over the rag. Leave it on for 30 minutes.

Take more cereals as well as other grains that are rich in fiber. It controls metabolic rate and eliminates cholesterol from the body.

As per the recent research, intake of supplements that are rich in omega-3 fatty acids, such as salmon, helps prevent gallstones.

Drink coffee daily, but be sure you don’t drink excess of it. 1 or 2 cups per day are adequate. Coffee boosts up the flow of bile, thereby, reduce the risk of gallstones.

Calcium binds the acids present in the bile. Hence, there are fewer chances for the formation of new stones, and the present ones are unlikely to worsen. Take calcium supplements daily.

Vitamin C makes cholesterol more water soluble, which permits our body to remove the gallstones out of our system rather than allowing it to accumulate in the gallbladder. Take 200 mg of vitamin C supplements on a daily basis if you have gallstones. You can also consume citrus fruits.

Alfalfa is known for cleaning the liver as well as for supplying various essential minerals and vitamins. Consume 1,000 milligrams of alfalfa in the form of capsule or tablet along with a glass of warm water, twice a day for 2 days.

Increasing the intake of vegetables is said to be a great way to prevent or keep gallstones away. As per a recent study, women who were vegetarian were less vulnerable to gallstones than those who ate meat.

Add honey in one teaspoon of turmeric and take it on a daily basis until you get rid of gallstones completely.

Use this herb to prepare tea. Add a few teaspoons of it in 8 ounces of water. Steep it for a few minutes and then strain. Drink it. Repeat the same process for two to four weeks.

This herb is a traditional natural remedy for gallstones. It shrinks the gallstones and reduces the pain. You can either prepare tea or add its powdered form to your salads, juices, burgers, veggies, etc. Crush and place one teaspoon of milk thistle leaves and seeds in a muslin bag. Place this bag in 1 cup of hot water and leave it for 5 minutes. You may add some honey as per your taste and drink it.

Dandelion herb supports your liver that further helps your gallbladder to function properly. Put 1 teaspoon of dried dandelion leaves in a pan. Pour 1 cup of hot water over it and cover it with a lid.  Steep it for 5 minutes. Add honey if you want. Drink this tea twice or thrice a day.

Note: If you are diabetic, then consult your doctor before taking it.

Making a peppermint tea with mint leaves is the best way to cure gallstones. But if you don’t like the taste of the tea, then you may choose to take peppermint oil capsules. Take one cup of water and allow it to boil. Add fresh, crushed mint leaves in the water. Turn off the flame, cover and leave it to steep for 3 to 5 minutes. Strain and add some honey as per taste.

Psyllium helps prevent the formation of gallstones in our body. Add one teaspoon of psyllium powder husk to one glass of water. Mix it well and drink instantly. Prefer drinking the mixture at night before going to bed on a daily basis.

This is a well-known herb that works wonders in curing gallstones. You may take this herb in the form of tea. To prepare the tea, take 4 or 5 leaves and add it to boiled water. Drink at least a cup of this tea a couple of times all through the day.

Taking the extract of this leaves prevents the development of gallstones.

Another important herb is rosemary which minimizes the pain caused by gallstones. It increases the production of bile and prevents spasms from taking place in the bile duct. It even breaks down the fat.

A single red bell pepper contains 95 mg of the useful vitamin C that assists in the avoidance of gallstones.