16 Homemade Pregnancy Tests to Try Out 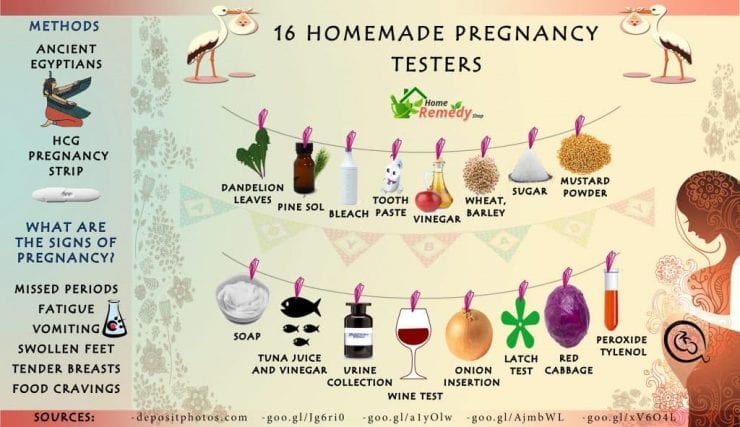 Ancient Egyptians had a unique way of testing if a woman was pregnant or not. Like modern pregnancy testers, they too used a woman’s urine to check, if she is conceiving or not. The Egyptian physicians would pour the woman’s urine on a mixture of grains, if any one of the grains germinated, the result was positive, and if none of the grains germinated, it was negative.

This technique was inaccurate and so it did not develop any further. As time went by, scientists came up with many pregnancy determination methods with little success until the late HCG pregnancy strip was invented in 1968 by Margaret Crane.

The First Signs of Pregnancy

Before we share these 16 homemade pregnancy testers, let’s take a look at the first signs of pregnancy. Missed periods, fatigue, vomiting, swollen feet, tender breasts, and food cravings are all the most common symptoms.

Another early sign of pregnancy is experiencing stomach cramps. Some women describe this as intense menstrual cramps, and can even find a slight red stain in their underwear as the fertilized egg settles into your womb. Obviously, your period won’t come, though.
Despite a baby being the size of an apple pip in the early stages, pregnancy can take a huge toll on your physical and emotional wellbeing. As such, you’ll experience severe exhaustion, even when undergoing your normal daily activities.

Another common early sign of pregnancy is a strange metal taste in your mouth and even the sensation of having too much saliva. This unusual taste can make you feel less hungry and even make it difficult to stomach certain foods. On the other hand, some women report unexpected food cravings for dishes they wouldn’t ordinarily choose to eat.

During the initial stages of pregnancy, your hormones are all over the place which can trigger unpleasant mood swings. Although these hormones are important for preparing your body to produce milk for your body, they can make you significantly more emotional than you’d usually be.

You might feel more upset or angry at things that wouldn’t typically bother you, but you can also feel intense bursts of anxiety and unhappiness. These unbalance of hormones can also make you feel nauseous – especially in the mornings.

If you experience any of these common symptoms, we recommend making one of these 16 homemade pregnancy testers before splashing out on a pregnancy kit from a store.

Dandelion leaves are useful in finding out if you are pregnant or not. Remember to drink plenty of water before the test, so that your bladder is full.

This is yet another good solution for replacing a pregnancy test. See below how to use it.

Although it may sound weird, bleach can be used as a pregnancy test as well.

Note – If you choose to use this method, remember to do it outdoors as opposed to your bathroom, because the fumes emitted out of bleach can cause a problem in breathing.

This is yet another helpful suggestion for a home pregnancy test if you don’t want to go to the pharmacy or the doctor.

Note – The disadvantage of this method is that there are no guidelines on the amount of urine that one has to use for the test. Besides, there is no defined time limit during which the mixture would turn frothy.

Vinegar is also helpful for this purpose. Alike toothpaste, there are no specifications about how much urine and how much vinegar is required.

If you want to follow the ancient wisdom, it’s a good idea to try out the wheat and barley test.

Try this test using your morning urine, as it is more concentrated.

Do this, if you have missed your periods.

You can use any soap for this test.

Tuna isn’t just a tasty dish, but it’s also helpful to find out if you’re going to have a child or not.

This is perhaps the easiest home solution for a pregnancy test.

If you have peroxide and Tylenol lying around the house, you can combine them for this purpose.

Wine isn’t just good for consumption, it’s also useful for finding out if you’re pregnant or not.

This may sound crazy to a modern woman of the 21st century, but this is a method that was used by the ancient Greeks. In those days, the doctor would insert an onion in the woman’s vagina and let it stay there for a night. The next day, if the woman’s breathe smelt of onion, it meant that she was pregnant. The Greeks believed that during pregnancy, a woman’s vagina is more absorbent and so it would suck all the juices of the onion into the bloodstream and that is why, the woman had a foul smell coming from her mouth the following morning.

This test goes back to the 1400’s. In those days, a woman would place a latch in a bowl and pee on it until it was completely soaked in urine. She would then have the difficult task of waiting for 3 hours to confirm whether she was pregnant or not. After three hours, on removing the latch from the container, if a print appeared at the bottom of the container, the result was positive.

This is more of a gender determination test, rather than a pregnancy test, but you can use it like that as well.

Finally, remember to always use your morning urine as a sample because it is less diluted. Be very careful while using products like bleach as the smell is horrific and it could get into your lungs. Don’t depend on the results of the above tests alone. Visit a gynecologist just to make sure. Whichever method you wish to use, always ensure your sample and tester are on a flat surface. Lastly, dispose of any plastic container, spoon or anything that you may have used while doing the test.