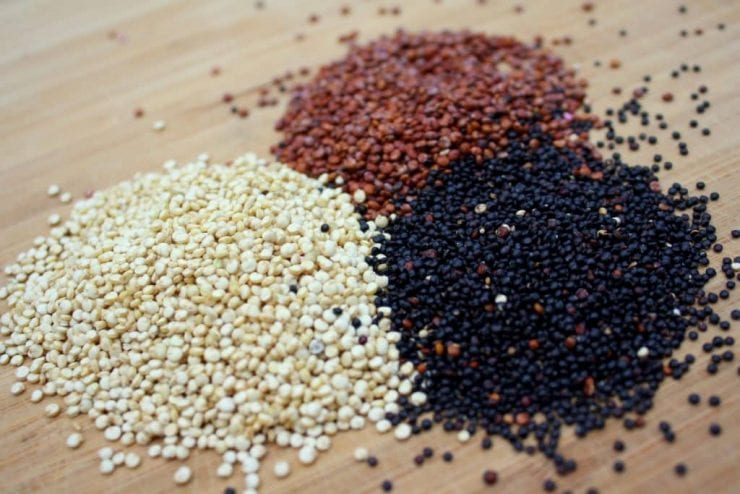 The super grain of the future is called quinoa, and it’s here to stay. Why? Because quinoa benefits are so fantastic for the human body that it’s simply futile to resist its invasion.

Jam-packed with minerals, protein, and fiber, while holding absolutely no gluten, quinoa is the answer to all our prayers. Check out the amazing list of quinoa benefits we’ve put together to get you started in your relationship with quinoa right now.

Quinoa is an ancient grain, native to the beautiful Bolivia. Bolivians actually called it ‘the mother grain,’ as it played such an important part in their diet. They didn’t overlook the quinoa benefits either, being very much aware of its nutritional value and lack of side-effects.

It has a mild flavor, crunchy to chew and its protein content is through the roof. A single cup of quinoa has 8g of protein, 15 percent iron, 5g fiber, 30 percent magnesium, omega-3 acids, and 19 percent folate. That’s quite an impressive layout about which people need to know more.

All these amazing quinoa benefits turn it into a fabulous substitute for pasta, rice, or couscous. Apart from that, it can also be ground into flour, which you can use just you would any other type of flour. This means you can bake cakes and bread without the fear of gluten looming in the shadows.

There are three types of quinoa to choose from: red, white, and black.

What Are the Quinoa Benefits You Should Know About?

Apart from the Bolivians, the Incas noticed how ideal for human consumption quinoa really is. They referred to it as ‘the gold of the Inca’ because they believed their warriors would fight better and longer if they ate quinoa on a regular basis. However, in case you don’t want to take the Inca’s word for it, let’s take a look at Quinoa benefits and how to make the most out of them.

#1. Nutrition at its highest

As you, probably, already deduced after we’ve spelled out the vitamin and fiber contents in Quinoa, this super grain is fabulously nutritious. One of the reasons is the fact that Quinoa is what specialists call a pseudo-cereal.

This means it’s not an actual cereal, such as wheat or barley, for example, but it is cooked and consumed as such. In reality, Quinoa is a seed, and we all know how nutritious seeds really are, far more so than cereal.

One cup of quinoa equals 222 calories, out of which 39 are carbohydrates and 4 grams are fat. It’s so nutritious that NASA is currently trying to find a way to cultivate it in outer space.

It’s a super food that astronauts could easily benefit from, seeing as it’s also very easily grown and prepared. Moreover, 2013 was officially dubbed the year of quinoa, because the United Nations consider it will play a significant part in food security all over the world. This is quite an impressive list of achievements for such a tiny seed.

Thanks to some fascinating molecules called flavonoids, quinoa is able to do all that. Its two flavonoids that have been studied most so far are Quercetin and Kaempferol, both found in copious amounts in this seed.

As a matter of fact, quinoa is even richer in Quercetin than other foods that are already considered Quercetin-high, such as cranberries. This is quite an astonishing fact, not the last one on our list.

As stated above, one of the primary qualities quinoa has and which makes it so sought after is its gluten-free status. Nowadays, gluten is seen as a nuisance and awful for your health.

So much so that a study performed in 2013 shows how approximately one-third of all US citizens is currently trying to pursue gluten-free diets. Here is where quinoa takes center-stage.

When going on an entirely gluten-free diet, it’s tough to give up traditional foods, such as bread or pasta. But it’s quinoa to the rescue since the seed can be milled into flour and used for homemade pasta and breads.

A word of caution on the gluten-free diet and the significance of quinoa regarding it – doctors have noticed a trend that sprouted from this diet. People want to eat gluten-free products but cannot keep to the ones that are naturally so.

Therefore, they turn to foods made with refined starches. These are your typical refined flours made from corn, tapioca, rice, and potato. However, doctors point out that this is junk food, even if it is gluten-free.

While you are excluding gluten from your diet, you’re still introducing unhealthy things into it. Remember – junk food made with gluten-free ingredients is still junk food. The way to go, as doctors advise, is to eat solely foods that are naturally gluten-free, such as quinoa.

#4. Quinoa has one of the lowest glycemic indexes

Simply put, the glycemic index measures how quickly foods you eat up the sugar level in your blood stream. Foods that rank very high on the glycemic index scale lead to obesity and stimulate hunger. Therefore, they are linked to many of the diseases Western culture faces today, such as cardiovascular disease and diabetes.

As far as the glycemic index goes, quinoa numbers 53, quite low. Still, it’s important to remember that, even though it won’t raise your blood levels, it’s still very high in carbs, which means it’s not suited for a low-carb diet when consumed in large amounts. Therefore, if you have a weight-loss plan, do not go overboard.

These four essential compounds are just some of the quinoa benefits you’ll receive once you start eating it regularly.

If you cook and eat one cup of quinoa, you will already have consumed 21 percent of your daily recommended dosage of protein. This is quite a fantastic piece of news for your intestines and bowel movements.

It will help you greatly by regulating your internal movements, and you can only benefit from that. Moreover, it’s a lot easier to digest quinoa than other grains or seeds, which means you will feel a lot less tired after a meal than you normally do.

The reason why you feel tired and sleepy after you eat a big meal is that a lot of the blood in your system goes to the stomach, which needs to digest. Heavy foods, such as home cooked meals that have a lot of gravy or junk food which is oily, take an insane amount of time to digest. This leads to sleepiness, acid reflux, stomach burns and inconsistent and irregular bowel movements.

Seeing as it’s so easily digestible, quinoa becomes the perfect food. It’s nutritious, filling for extended amounts of time, and it isn’t hard on your stomach or intestines.

#7. Quinoa benefits you by making you live longer

If we were to take into account what some researchers say, the high fiber content in quinoa could actually make you live longer. There was one study published in the American Journal of Epidemiology, which states that a diet based on a high fiber intake may reduce the risk of mortality.

There are also two additional studies that claim the same thing. The first one was published in BioMed Central. It states that researchers found positive results when linking whole-grain foods with death arising from cancer, heart attacks or heart diseases, diabetes, and others.

The other study was published in JAMA Internal Medicine. They discovered that eating whole grains such as quinoa is considered to reduce cardiovascular diseases in both men and women across America.

#8. Quinoa does not invite any kind of diseases

Many of the ailments modern man suffers from are primarily caused by foods we ingest. All sorts of conditions, from migraines to stomach aches to some skin maladies trace back to one or more improper things we ate. However, this is not the case with quinoa.

This super ‘grain’ does not feed bacterial or fungal infections. It’s quite an important thing, as medical journals state that a staggering proportion of 8 in 10 Americans suffer from fungal infections, such as candida.

Apart from this, disease wise quinoa nourishes the good bacteria in the intestines, the so-called ‘microflora’, which helps you relieve waste.

As if all of the above weren’t already a plethora of reasons to convince us to use this magical seed in our cooking, here’s another tasty and intriguing one, which you might not have heard of before. You can actually ‘popcorn’ quinoa.

‘Popcorn’ is a general term, but what we mean to say is that you can use quinoa exactly as you would use corn for popping. Granted, it does not flourish quite in the same expressive way corn does. However, when popped, quinoa becomes a lot fluffier and tastier.

All you need to do is to heat up a pan on the stove. No oil is required. Put in the quinoa in a thin layer so that all the seeds touch the bottom of the pan and let them pop away merrily. Be careful, as they will pop in a matter of seconds.

You’ll know they’re done when they start smelling like freshly toasted nuts and when they become golden brown. The process is similar to toasting sesame seeds.

By popping quinoa, you gain a whole new alternative to the classical popcorn. It’s a lot healthier and oil free, not to mention it completely lacks gluten.

Being antiseptic is one of the quinoa benefits even the Inca knew. They used to treat their injuries with quinoa, and they were completely right.

Modern studies have shown that quinoa seeds have a soft outer shell very rich in saponins. These are the exact compounds that give quinoa a slighthly bitter taste if not cooked correctly.

To simplify matters, think about saponins as a type of detergent that thoroughly cleanses the skin and any wounds and gauges it might have. The effects are antimicrobial. Apart from this, saponins in quinoa help treat an irritated or sensitive scalp.

#11. Quinoa is very versatile when it comes to recipes

The one thing that makes it very easy to introduce quinoa into your regular diet is not it’s taste, but rather how versatile it is. This versatility means there are hundreds of dishes you can cook using quinoa as the main ingredient, side dish or replacement for other, much unhealthier foods.

Here are a few examples.

Taking into account all the quinoa benefits presented above, this little seed which likes to parade around disguised as a grain might be the answer to all our food and health problems, now and in the future.

It’s already proven to be the perfect health food. It has so many uses, it can take the place of many other grains in our diets that are not as healthy for us.

Furthermore, because of the many uses, it is incredibly affordable. Instead of buying multiple items, such as flour, popcorn, and rice, you can just buy quinoa. So, it saves you money, too.

We highly recommend adding quinoa to your diet. Learn how to cook it, and take the tips and advice we’ve given here to find ways to make use of it whenever preparing a meal.

Tell us more about how you incorporate quinoa into your diet. What is your favorite way to prepare and eat it? Share your thoughts, recipes, and suggestions in the comments.