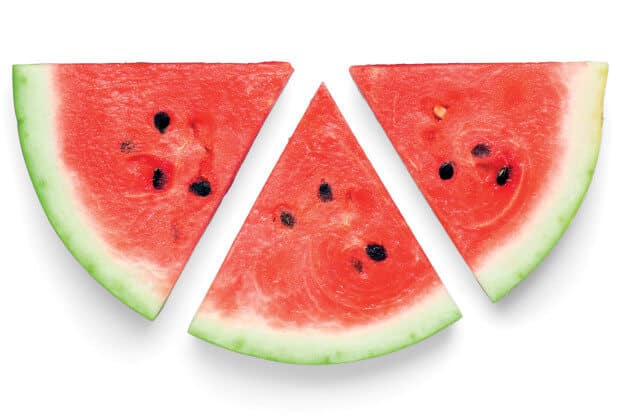 Contrary to popular belief, watermelon comprises more than just water and sugar. A quick look at the nutritional breakdown sheds some light on why we should include watermelon and watermelon juices in our daily meal plans. To get an inkling about the health benefits of watermelon, a cups of watermelon of roughly 152 grams has 43 calories no fat, 11 grams of carbohydrates and 2 milligrams of sodium. The vitamin list doesn’t disappoint either. The same cup of watermelon comprises 21% Vitamin C, 17% Vitamin A and 2% iron from the daily recommended intake. Besides these, watermelons are also high in riboflavin, vitamin B6, thiamin, magnesium, zinc, potassium, selenium, lycopene and manganese. Who knew this light, refreshing fruit contains so many beneficial nutrients despite being made of more than 90% water?

This delicious red fruit is not only tasty, but it also has healing, antioxidant and anti-inflammatory properties. These make it a great ally for skin conditions like acne, mouth ulcers and sores. Here are a few pointers on how to get the most out of watermelons next time they are in season. 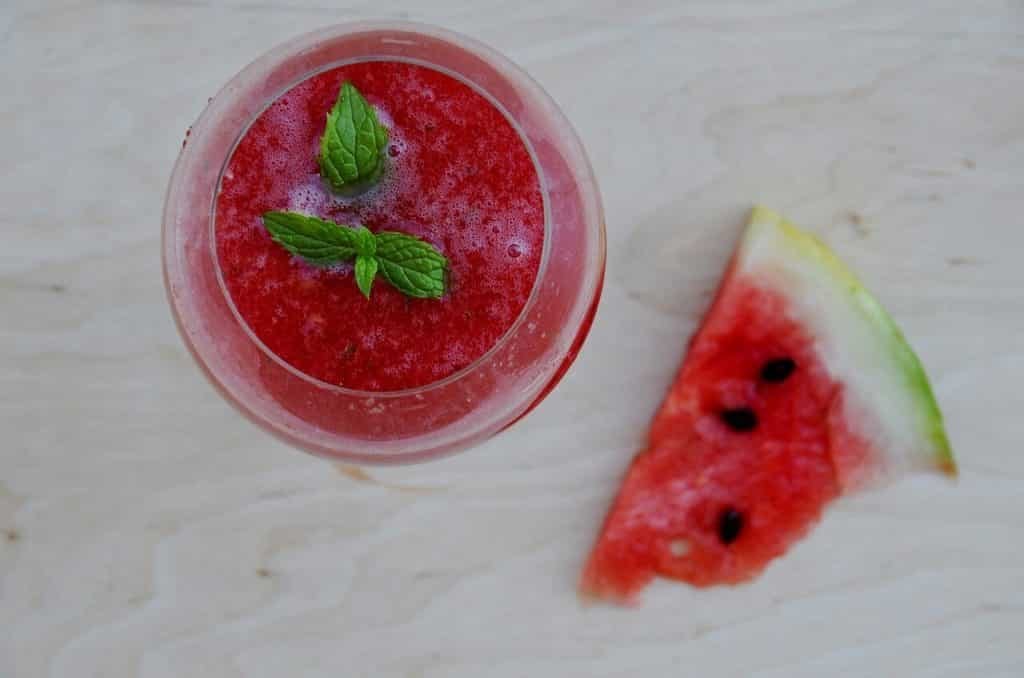 This fruit can be found in supermarkets all year round. But if you want to reap all the health benefits of watermelon, consume it mostly when it is in season. A great indicator to work out if a watermelon has been genetically modified is to look at how many seeds it has. The more seeds, the bigger the chance you bought an organic watermelon. When you’re choosing watermelons, they should be heavy for their size and vibrant green in color. To tell how old a watermelon you can take look at the stem. If it’s withered and brownish, most likely the fruit was been cut a while back. If the stem is still vigorous and hasn’t lost its shape, the fruit should be fresh on the inside.

If you need even more reasons to eat watermelon every day in the summer besides its cooling taste, check out our list of health benefits of eating watermelon.

There are many causes for age spots, premature wrinkles and fine lines, with the main one being free radicals. The reason why watermelon does an excellent job of preventing premature ageing is because it is packed with lycopene, antioxidants, vitamin A and vitamin C. These are the primary requisites for glowing, bright skin that can be achieved by eating watermelon. To get the best of the anti-ageing properties of watermelon, you can combine consumption with topical uses. This fruit will prevent signs of ageing both from within and from outside, keeping you hydrated.

Diabetics can safely consume watermelon, new studies show. Despite the fact that watermelon comprises carbohydrates and natural calories, it’s not dangerous for patients dealing with diabetes to eat this fruit. On the contrary, the nutrients and vitamins in watermelon make it a great addition to a diabetics’ meal plan. However, carbohydrates should be counted and the maximum daily intake should still be strictly followed. The zero cholesterol and fat in watermelons makes them a harmless snack that is packed with powerful antioxidants.

A natural diuretic, one of the top health benefits watermelon has to offer is ridding the body of any excess fluids. Watermelon fasting is not uncommon among patients struggling with kidney stones, kidney infections or both. The day of fasting involves eating just watermelon for twenty-four hours. Since watermelon is around 92% water, this makes it the best adjuvant in urinary tract infections, especially post-treatment, when the body needs plenty fluids. If you’re dealing with kidney stones, you might want to try out watermelon seeds tea that are also packed with nutrients and vitamins.

The watermelon cleanse is highly beneficial for the liver. Three cups of watermelon juice per day will help it process ammonia, which is created by protein digestion. The juice will enable the liver to convert it into urea, which will safely be removed from the body through urine. Not only your liver will benefit from a watermelon juice cleanse, but your entire body. You will feel more energetic and any skin conditions like pimples or dry patches could calm down owing to the hydrating properties of the watermelon.

What makes watermelon an excellent ally for bone health is the high concentration of lycopene. Recent studies back up that lycopene plays a major role in maintaining bone health. Watermelon health benefits also include promoting stronger bones by decreasing the activity of osteoclasts and osteoblasts, the bone cells that play an important role in the development of osteoporosis. The high levels of potassium found in watermelon help the body easily retain calcium, which can lead to healthier joints and bones.

Regular consumption of watermelon can decrease the fat accumulation in the body’s fat cells. A less popular health benefit of watermelon, body fat reduction is owed to the beneficial ingredient that is called citrulline. This is an amino acid that has the ability to transform in arginine. Citrulline will help the body produce less fat, which will lead to preventing fat over-accumulation. At another level, watermelon can make you feel full for longer due to its high percentage of water. This is bound to decrease cravings and only make you want to eat healthy foods. 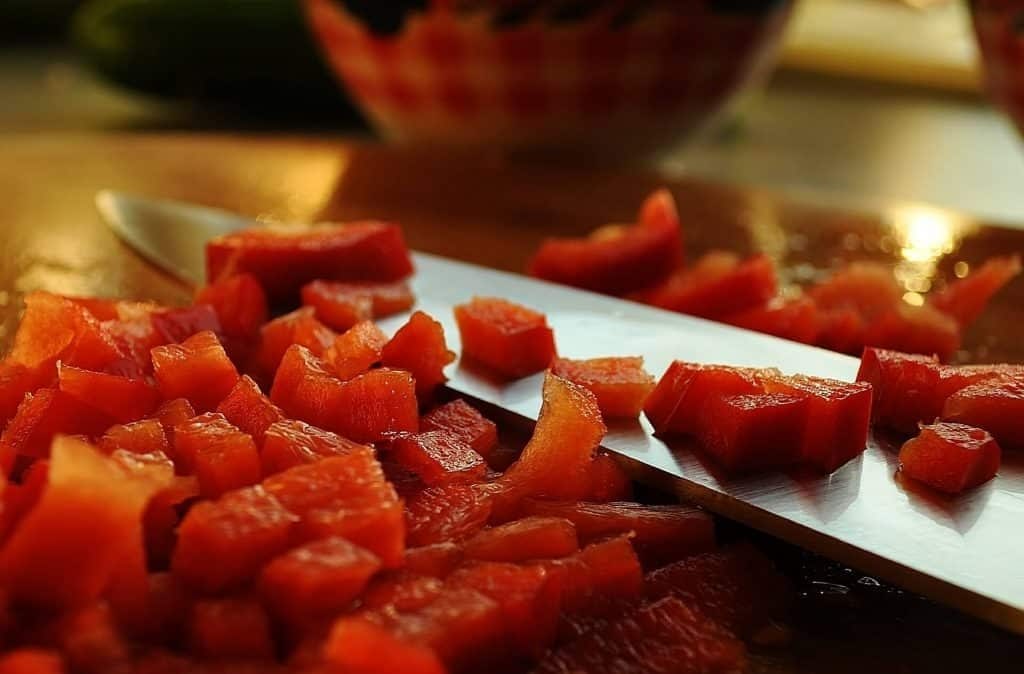 Watermelon is loaded with Vitamin C, which has an important role to play in the good functioning of the immune system. Vitamin C maintains the integrity of the cells, which keep reactive oxygen species at bay. When these don’t have the chance to damage the cells, the immune system is protected and can perform its functions without any problems. Another benefit of Vitamin C is that it speeds up the wound healing process, enabling the body to form new connective tissue. Vitamin C also support collagen production, which helps skin look younger for longer.

The same citrulline that we can thank for keeping body fat in check can also help promote hair growth. By increasing the arginine level within the body, scalp blood circulation is boosted. At the same time, the minerals and proteins found in watermelon encourage hair to grow and thicken. A reliable source of vitamin A, vitamin B1 and vitamin B6, watermelon can make hair shinier and stronger, especially for those who struggle with brittle hair that damages easily.

If watermelon is eaten in reasonable amounts, they should produce no serious side effects. If you eat a very large amount of it daily, however, you may experience some issues form having too much potassium or lycopene.

Consuming more than 30mg of lycopene daily can potentially cause diarrhea, indigestion, bloating, and nausea.

People who have serious hyperkalemia, or who have too much potassium within their blood, should not consume more than around a cup of watermelon each day. This is less than 140mg of potassium. Hyperkalemia can often result in reduced muscle control, irregular heartbeats, and some other cardiovascular issues.

Loading up on water-dense foods such as watermelon can be a tempting option for those who wish to lose weight because they can help you to feel full, however, you should not go to extremes with this. Eating purely watermelon will result in some weight loss but this will mostly be due to muscle loss.

Watermelon is also relatively high in sugar. Although these sugars are naturally occurring, the sugar levels are still quite high.

The watermelon fruit originated in the Kalahari desert located in Africa.

Egyptians used watermelons to place in the tombs of kings to nourish them in their afterlife. The first ever recorded watermelon harvest is depicted in Egyptian hieroglyphics from around 5,000 years ago.

The spread of watermelon use was made by merchants across the Mediterranean sea. By the 10th century, watermelons had spread all the way over to China. China is now the world’s leading producer of watermelons.

In the 13th century, the Moors brought watermelons to Europe.

It is most likely that watermelons made their way over to the United States with African slaves.

Early explorers used to use watermelons as canteens.

The very first cookbook which was published in 1776 in the United States contained a recipe for watermelon rind pickles.

Around 200 to 300 different varieties of watermelon are grown in the United States and Mexico, however, only around 50 of those varieties are very popular.

By weight, the watermelon is the most consumed melon within the United States, followed by the Cantaloupe and Honeydew.

Watermelon is the official state vegetable of Oklahoma.

All of the parts of a watermelon can be eaten, including the rind.

According to Guinness World Records, the world’s heaviest watermelon was grown in Arkadelphia, Arkansas by Lloyd Bright in 2005. It weighed a whopping 268.8 pounds.

If you want to enjoy all the amazing health benefits of watermelon, you can easily incorporate it into your meals. Its sweet taste makes it an excellent desert. However, recipes don’t stop at just cutting up a watermelon and serving it as it is. Watermelon is great after a strenuous workout because it brings hydration back into the body and cools it down. Go for a banana watermelon smoothie after a run. It’s quick to make, sweet and refreshing. For fancy cocktails, freeze pieces of diced watermelon in your ice tray. If you’re feeling fancy, experiment with textures and tastes by making watermelon salads. Pair diced watermelons with feta cheese, red onion, fresh spinach leaves and mint for a tasty lunch on the go.