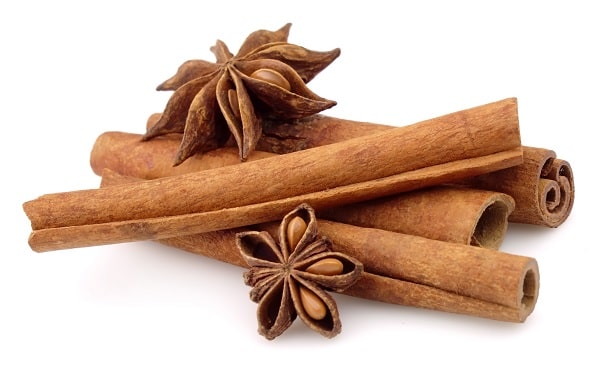 Cinnamon or dalchini is a spice, which is used as a condiment in cuisines due to its delicate aroma. It is obtained from the bark of the cinnamon tree and is also used widely because of its medicinal properties. Chinese medicine and Ayurveda have also considered cinnamon as a sacrosanct and a superpower ingredient, which is being used in the treatment of disorders, like indigestion, colds, and cramps, since ages. The therapeutic components of cinnamon are also believed to improve energy, strength and circulation of the blood. Let’s have a look at some of the surprising health benefits of this super spice.

1. Blood Sugar Control : Several studies have found that cinnamon is helpful in controlling the blood sugar. It is a popular home remedy to treat type 2 diabetes.

2. Candida Yeast Infections : Researchers have found out that cinnamon oil is highly effective in treating a number of strains of Candida, like Candida tropicalis, Candida albicans, Candida krusei, C. parapsilosis, and C. orthopedics. It has proved its amazing abilities in curing yeast infections that can’t be treated with medicines.

3. Stomach Bug/Flu : By far, the best remedy that can cure stomach flu is cinnamon as it has strong anti-bacterial properties. It is an extremely effective antidote against Salmonella, Campylobacter, and Escherichia coli. Cinnamon tea, cinnamon oil and cinnamon powder, all are helpful in curing stomach bug.

4. Irritable Bowel Syndrome : Cinnamon radically reduces the uneasy feelings related with Irritable Bowel Syndrome, in particular, the bloating. It enables the gastric juices to work normally by killing bacteria and curing infections in the gastrointestinal area. Moreover, if you face stomach cramps and distress, a cup of cinnamon tea, 2-3 times per day, can reduce the pain to a great extent.

5. Prevents Cancer : Cinnamon, in its several forms, has proven to be a great remedy in curing gastric cancers, tumours, and melanomas. Leukaemia and lymphoma cancer cells can also be mitigated by cinnamon.  It contains Cinnamaldehyde and Eugenol that have proven excellent in treating cancerous cells.

7. Alertness, Memory & Cognitive Development : Cinnamon is a useful condiment to keep the person more vigilant and less aggravated. Regular users of cinnamon have proved to be sharper in recalling and responding to things.

8. Anti-oxidant : Cinnamon is considered to be amongst the top seven anti-oxidants in the world. It virtually repairs all the damaged body parts, from skin to organs.

9. Weight Reducer : Apparently, cinnamon helps in thinning the blood and thereby, inducing blood circulation. Improved blood flow boosts the metabolic rate of the body, which is helpful in reducing the weight.

10. Muscle Pain : Massaging from cinnamon oil can help in alleviating muscle pain. Add a few drops in water and dunk the aching area to get relax and quick relief.

13. Tooth Decay and Gum Disease : Cinnamon oil is used as the main ingredient in many chewing gums, breath mints, mouthwashes, and toothpaste. The anti-bacterial properties present in cinnamon plays a vital role in chucking out harmful bacteria, without causing any damage to the teeth or gums.

14. Cold, Sore Throat and Cough : Intake of cinnamon tea or cinnamon stick tea at the first sign of onset of sore throat will stop the ailment and check it from further spreading. Chinese medication generally uses and recommends cinnamon for phlegm cough.

15. Premenstrual Syndrome (PMS) : Being rich in manganese, cinnamon is an excellent spice in mitigating the ill-effects of PMS. It largely relieves a woman from pre-menstrual mood swings and cramps.

16. Food Poisoning : Cinnamon soothes down a person suffering from food poisoning. It kills bacteria, fungus and other microbes and combats well with the troubles, caused by food poisoning.

Good Recipes That Call for Cinnamon

Breakfast, lunch, dinner, snacks, desserts, all of these food categories can only get better when you add in cinnamon. Now that you know all the health benefits of cinnamon, you are probably wondering how you can incorporate it into your everyday life. Here we go!

At pretty much any coffee shop you go to, you will find a layout of spices for your enjoyment. Things like chocolate powder, nutmeg, and powdered sugar are all good additions. My personal favorite, though, aside from honey, is the cinnamon. It gives you that desirable Fall flavor that many cannot get enough of. In both tea and coffee, this distinct flavor will add to your drink and add health to your body.

In our breakfast favorites, we can add in this spice to make it even more delectable and healthy. These meals are not very healthy on their own, so it does not hurt to add in a spice that will impact your body in the best ways!

You name a type of dessert cinnamon would not be an excellent ingredient inside of. I will wait. You can’t think of any because they do not exist! Cinnamon adds to the sweetness and brings out the already delicious flavor.

At this point, we have not already thought outside of the box much. The suggestions above are probably ones you are familiar with already. But now we are getting into healthy dinner territory. Have you ever just wanted a warm sweet potato for dinner. Think of the butter, the orange gooey flavor, and don’t forget the cinnamon! The same goes for foods like squash soups and pecan salads. Cinnamon makes everything better and tastier.